The Pandemic travel restrictions to the UK had just been eased. The remaining requirements were to take a simple Lateral Flow Covid test two days and eight days after arrival, and a Viral Covid test within three days before returning to the US. I felt it was a good time to visit my aging friends in London after a couple of years of forced separation, isolation and anxiety. For my cohort in our 80s, this amount of time is a big proportion of the rest of our lives.

When I got there, I found that the city had resumed normal life, more-or-less. Most people wore masks inside buildings, certainly all service staff in shops and restaurants, and in transport as well, although there is no check on many that don’t follow that rule. Some places, such as the National Theater and museums, required masks.

I met my friends at dinner in their homes or in restaurants, revived convivial exchanges about recent events, trials of the pandemic and aging. Meals at Anima e Cuore and The Junction, both in the Kentish Town area, were animated with lively conversation helped by a flow of good wine and food. I took a train up to Chipping Norton in the Cotswolds to have lunch with a friend at the Potted Goose, a local pub.  We had a nice walk around the village lined with grayish, old stone cottages to work off the meal.

View of the City from Parliament Hill, Hampstead

On a sunny morning I walked up Hampstead Heath towards Kenwood House to lunch at its café, The Brew House. Unusually, I felt lost, as if I had walked too far in the wrong direction and skirted the café. I asked a man walking his dog for directions. Indeed, I had walked past my destination.

As we walked along, he asked, “Do you live around here”.

“I live in the US. I am visiting, but I lived around the Heath many years ago.”

“How long have you lived in America?”

I was surprised by his comment, but deflected it by replying, “I don’t pay much attention to my accent as long as I am understood, but I do say “tomayto” the American way”. We parted ways soon after.

I walked to the Brew House and ate a sandwich made with free range eggs and watercress on whole wheat bread and chips, chased by a Cherry soda, sitting at a wood table with birds flying around waiting for scraps. I reflected on the comment about sounding British. Only a few weeks ago someone else had said I was a Brit, a deeper identification than just sounding British. Yet, of the three cultures I have lived in, I have spent the least amount of time in the UK (India 17 years, UK 10 years, and US 54 years). That decade in London though, while I was at college and a trainee professional, was in my formative years, between 18 and 28, when I made close, lasting friendships. I am writing a longer essay about my identity, wrestling with my three cultures to evolve as a unique mélange. 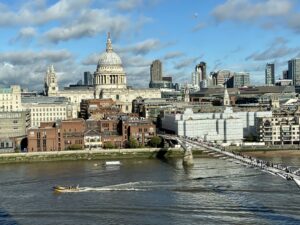 View of the City from Tate Modern

Coincidentally, the evening after my arrival in London, I saw “East is East” at the National Theater dealing with similar issues. It is a revival of a play (and movie) staged in the 1990s about a Pakistani-English family in the Manchester area. In it, the father remains culturally glued to his origins despite being married to an English woman. Their seven children struggle to find an identity while facing stereotyping and discrimination in the community. The parents, and each child, express their discomfort differently, in ways that are all still current to some extent, but felt dated, and attempts at casting the confusion humorously fell flat. While the acting was exemplary, the voices (especially the mother’s) were faint, didn’t carry clearly to the first row of the balcony. My friend, who had seen the movie decades ago, much preferred it to the play. 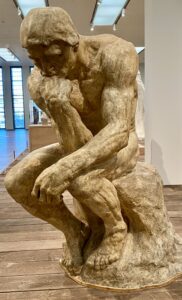 Museums were open, but with a timed reservation that could be made online. I visited the two Tates. At the Tate Modern, I walked through its always-interesting permanent collection, but concentrated on a special exhibit of Rodin’s plaster sculptures. Using this material allowed him to revise his work. The exhibit showed his process in stages, from drawing to sculpture. “The Thinker” is prominently placed in the exhibit and a bronze cast of this sculpture also marks Rodin’s grave. I enjoy his museum in Paris immensely and my alma mater, Stanford, has many of his works in its museum as well.

I walked through Tate Britain’s collection of British art through the centuries and dwelled in the galleries with the JMW Turner paintings of land and seascapes, showing his superb use of light. Apparently, Rothko admired Turner’s work and donated four of his huge abstract paintings to the Tate Britain that were originally commissioned for the Seagram Building in New York. Although imposing, they would be in more congruous company in the Tate Modern. The imaginative sculptures by Hepworth and Moore are captivating. I resolved to visit the Barbara Hepworth Museum in St. Ives on my next trip to England. 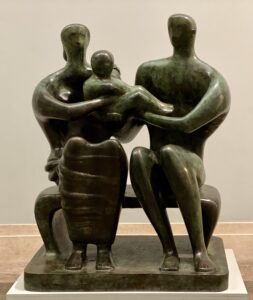 To assist with details for my essay on identity, I walked around places that I had lived in Hampstead and around the London School of Economics. I did not get to visit the City where I worked for a few years, probably a psychological barrier because I hated the work of accounting, but I did photograph it from Parliament Hill on Hampstead Heath. With many new, tall buildings, it now looks different from my time there.

From this visit, I concluded that I would resume traveling carefully, avoiding high-risk places that also those that don’t have world-class medical care, or access to new medicines that ameliorate or prevent Covid infections.