My first journey after the pandemic grounded everyone was in March 2021. I moved from the San Francisco Bay Area, where I had lived for 21 years, to Chevy Chase, Maryland, just across the border of Washington DC. After unpacking and settling into my apartment, I felt a yearning to be in New York, my favorite city, now close by. I needed a dose of its intensity, diversity and culture after being cooped up alone for a year. A medical check-up by a specialist at NYU provided the excuse to visit in mid-May and then again in late August. Luckily, despite a few anxious days, both check-ups found nothing to worry about. I had time to renew my acquaintance with the city.

Theaters were still dark, but museums were open with reservations, allowing entry for a limited number per hour. As members were given preference, I made sure that my cards were current. My training to appreciate paintings is sparse, just a course or two online, and repeated visits to many of the leading museums in the world. Over time, I have learned to recognize some of the finer aspects, which has inspired me to accumulate a modest collection.

I liked best Julie Mehretu paintings exhibited at the Whitney. She is an Ethiopian-American abstract artist who makes huge paintings that are inspired by social and political events, such as the wildfires in California and the burning of Rohingya villages in Myanmar. She paints in successive layers sealed by coats of transparent acrylic, which gives the paintings a three dimensional aspect. 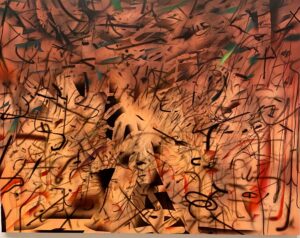 At the Metropolitan Museum, I saw an extensive exhibit of Alice Neel’s paintings. She championed social justice, was committed to humanist principles and painted images of activists demonstrating against fascism and racism, or people suffering from the great depression. Many artists subsequently emulated the candor of her work. The Medici exhibit had some great portraits of the family, and of Dante and Michelangelo. The Dutch Masters exhibit showed paintings from the seventeenth century, especially the work of Rembrandt and Vermeer. These artists used light and colors to depict the domestic lives of women among other social observations. I particularly liked Rembrandt’s portrait of Aristotle wearing somber Dutch clothes, looking at a bust of Homer. 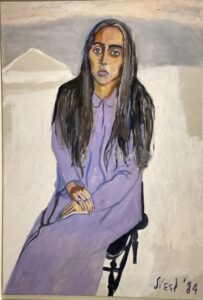 Walking through MoMa’s extensive collection of Impressionists’ paintings and relaxing in the sculpture garden afterward is always a pleasure. It had special exhibits as well: Cezanne’s drawings along with some paintings show how his vision evolved by practicing drawing; Calder’s work had his early wire and wood figures, mobiles in motion, and a huge abstract sculpture; and Automania, had nine classic cars in the museum, including a restored VW Beetle, Willy’s Jeep and Jaguar E-type, that have altered our ideas about mobility, moving us longer distances in greater comfort and at higher speeds.  Architect Le Corbusier compared them to ancient Greek temples, perhaps a farfetched analogy. 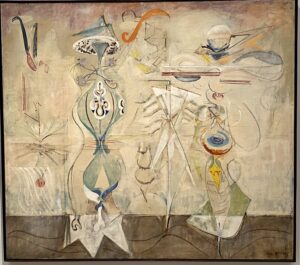 I have had a longer, but on and off, connection to photography. My brother-in-law was a keen photographer and used the finest equipment available in India in the 1950s. He started me off with a box camera at the age of 10, but I soon progressed to a reflex camera and learned to judge distance, light and speed, and to develop and print my work. One of my photos was awarded a prize in the town where my boarding school was located. After many years of inactivity, I bought a camera when I started to travel for work at the World Bank. Eventually I progressed to a middle level Canon with a variety of lenses, but grew tired of lugging around the heavy load. A few years ago, I dumbed down to an iphone as its capabilities improved. 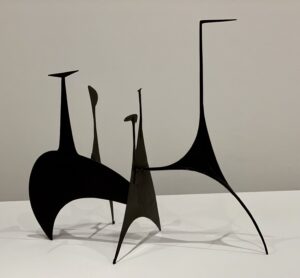 I especially appreciate photographs that tell a story. In that vein, I liked Dawoud Bey’s work at the Whitney. It combined personal expression with political responsibility. Bey prefers to collaborate with his subjects and considers phrases such as “to take” or “to shoot” a photo to be invasive. His exhibit focused on racism and the escape from slavery on the Underground Railroad.  The Met featured photographs by women from over 20 countries who were professionals and artists from the 1920s through the 1950s, a period shaped by two world wars. They produced visual testimony of their personal experiences and the social and political transformations of the time. 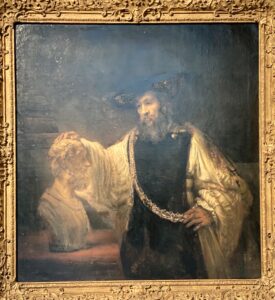 I timed the second trip to coincide with the beginning of US Open Tennis tournament and bought tickets for the first five sessions. I started to learn how to play tennis at the age of 8. The game has since been a part of my life as a player and spectator, also on and off, for over seven decades. I attended the Open every year when I lived in New York, and Wimbledon when I lived in London, a long time ago. My visits after moving to California were infrequent. I wanted especially to attend this year to show my support for the sport and players after the lull caused by the pandemic. The requirement to show evidence of vaccination for entry into the stadia was a good move to make us feel safer. 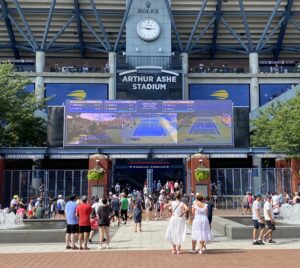 I managed to see most of the top seeded players in the mens and womens draws. In the mens draw, masterly Djokovic was the favorite, mostly cool and calm this year, despite losing at least a set in each of his pre-finals matches except the second round. I saw his first match against the enthusiastic young, hard-hitting, 18 year old Holger Rune. Spectators got behind the young man with shouts of rooooone in unison that Djokovic mistook as boooos for him. In the finals though, Medvedev outplayed him strategically, with Mohammad Ali-like rope-a-dope, looping balls deep into to the center of the court, forcing Dojokvic to be aggressive and eventually make mistakes. Medvedev also served well and deserved his victory in straight sets.

Andy Murray, back from a hip resurfacing procedure, gave third seeded Tsitsipas a run for his money, taking him to five sets before losing. It was good to see Murray’s perseverance, hitting his forehand with both feet in air, challenging his surgeries. Like Tsitsipas, the wave of young players, Zverev, Shapovalov, Rublev, are tall, lean, and athletic, move about with engaging nervous energy, have speedy serves, a full range of ground strokes and crisp volleys at net. Berrettini, just as tall, is solidly built and packs a wallop in his serve. Medvedev though, at number 2 in the world, looks different, tall of course, but laconic and skinny, though he moves fast and hits the ball as hard as the others. While I miss Roger Federer’s elegant ballet on the court and Rafael Nadal’s grit, I believe these young players will blossom to keep the sport attractive for spectators. 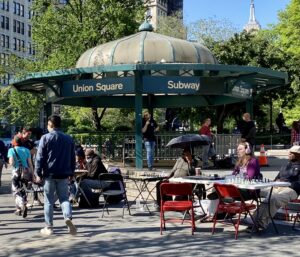 In the women’s draw, I saw Barty, Osaka and Halep play well in the first round and I thought the first two would contend the final, but they lost in the third and fourth rounds, Osaka because of an emotional meltdown. Two young unseeded, but poised teenagers emerged to reach the finals: Raducanu, all the way from the qualifying rounds; and Fernandez after beating two Grand Slam winners and two other high seeded players as well. In the finals, I thought Fernandez would prevail, but her lefty service and ground strokes were inconsistent, while Raducanu stayed calmly aggressive and prevailed. After Serena William’s departure, the womens field is open and these two young ladies will likely be in the mix to win future championships.

Being a tennis purist, I noticed with discomfort many spectators glued to their smart phones, looking up at the court only when they heard the noise of ooh’s and clapping. By that time they had missed the play. Moreover, many were sipping Vodka cocktails, wine and beer and munching fried food for most of the day. The inattention was surprising considering the cost of the tickets, and dramatically different from the pin drop silence at Wimbledon.

I was at the Center for two full days, from about Noon until 10 pm, and another half day. My section of Arthur Ashe stadium got the sun in the afternoon, felt like sitting in a furnace. I took refuge in the air-conditioned American Express Lounge whenever the waitlist for entry permitted. The food court presented a different challenge. Everything offered was fried or deep-fried. Eventually, in the dizzying maze of stalls, I spied one offering Hawaiian Poke Bowls, rice with raw tuna or salmon pieces, sprinkle of greens, showered with a dressing. The food was expensive and the drinks were exorbitant. 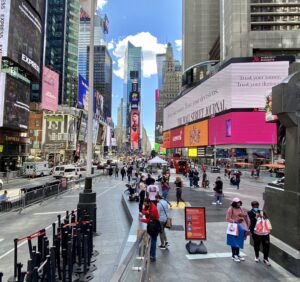 Aside from imbibing NYC’s cultural and sports arenas, I enjoyed walking through the city, from the Met through Central Park, down a thinly trafficked Fifth Avenue with its fancy stores to MOMA, and then down Broadway to lit-up Times Square, sparsely populated on my first visit, but fuller by the second. I took the subway down to Union Square, watched chess players for a while and art stalls, and then walked to the Whitney. The neighborhood around the museum, the erstwhile meatpacking district, has been gentrified. Buildings have been renovated and house fancy stores and restaurants with outdoor seating, especially in pedestrian spaces at major road intersections. Afterwards, I strolled along the High Line, now a well-used walking and jogging path.

After my second visit to the Whitney, I walked along 11th Avenue to the Little Island, a part of Hudson River Park, and entered through huge, concrete, elevated, flower-beds. Inside were sculptures, an amphitheater, trees and flowers, and great views of New Jersey and downtown Manhattan. The plantings are varied to provide an environment that changes with the seasons, with flowering trees and shrubs, fall foliage and evergreens. Further along the Hudson River in Hudson Yards, a huge and unusual sculpture, shaped like a Vessel with a spiraling path winding up to the top, dominates the view. Access to the path was closed because a few people used the height to commit suicide. The Edge is nearby, a skyscraper with a viewing platform jutting out of an upper floor for a view of Manhattan and beyond. It’s suspended in mid-air with a glass floor to give a feeling of floating in the sky. Tickets are needed to ride up the elevators to get the views, but they were not available at the time. 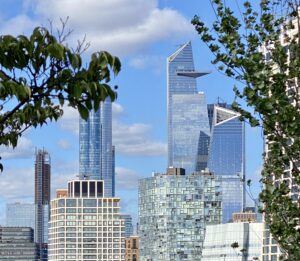 I rented an apartment on East 85th Street between Park and Lexington Avenues, easy walking distance to Central Park, the Met and the subway. I enjoyed morning walks around the Reservoir with a stop at Butterfield Market (formerly Dean and Delucca) on Madison Avenue and 85th Street to pick up a croissant, or a toasted Onion Bagel with butter or cream cheese from Tal BageIs on 83 rd Street and Lexington Avenue. New York has myriad options for restaurants and stores for simple fare at reasonable prices. I sampled many and some nice dinners at friend’s apartments. After one of them I got caught in the September 1 thunderstorm and squall, had to struggle with an umbrella held horizontal against torrential rain, and wade through water in the streets and subway entrances on the way back. 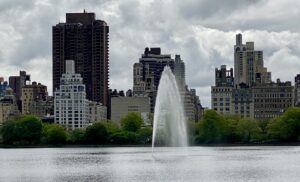 View from the Reservoir

Does art have anything in common with tennis? Yes, quite a lot, I think. Monet’s exhibit in Seattle and Cezanne’s at MOMA showed that artists repeatedly paint the same scene, a quest to perfectly represent what they see or imagine. Likewise, tennis players, even champions, practice strokes daily to perfect their execution, especially under the pressure of a match. Many years ago, I remember Federer running from the net to the back of the court to return a lob from Djokovic. He hit the ball between his legs, a “tweener”, while facing the back of the court. Djokovic, who had come up to the net, looked astonished as the ball passed by him. Later in an interview, Federer explained that he practiced that shot repeatedly, but didn’t think he could pull it off in the heat of a match. Practice makes perfect.