On the morning of my arrival, a late winter storm carpeted London under a few inches of snow. I got to my destination from the airport using the railway, underground and bus, enjoyed the pleasure of riding in public transport that is not readily available in California. It was a good choice as cars were moving cautiously in town.

It’s been 18 years since I was in cold weather and snow, making the crisp air and crunch with each step fun. Other pedestrians were walking carefully, taking small steps, especially the elderly, all bundled up.  London looked cleansed with its gray pavements and sidewalks hidden under a white blanket, especially pretty at night when lights reflected iridescently.  My delight with the weather lasted for a couple of days, then with rising temperatures, the snow dissolved quickly and became slush and drained off, bringing London to its normal aspect. 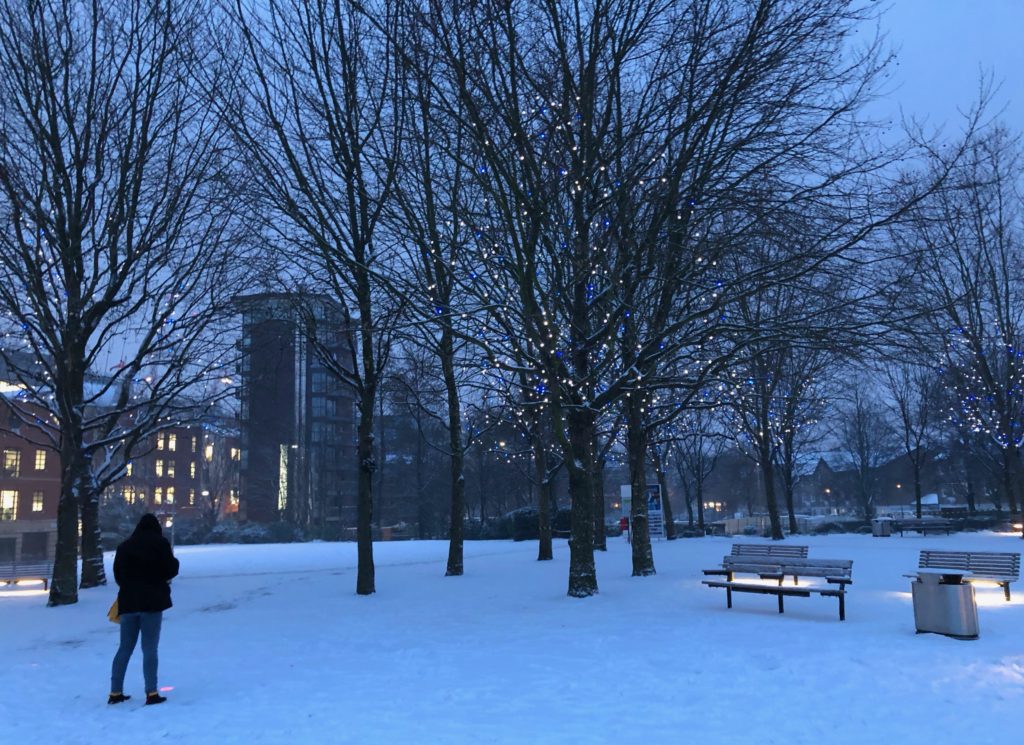 I was lucky again to have the use of a friend’s apartment in Hampstead for my stay.  Hampstead Heath remained mushy and tricky to walk on after the streets cleared, except for a few paved paths. Instead, I walked on local streets for exercise, discovering new neighborhoods such as Abbey Road, where the Beatles recorded their music, and Kidderpore Avenue where attractive high rise apartments were under construction behind Georgian facades. 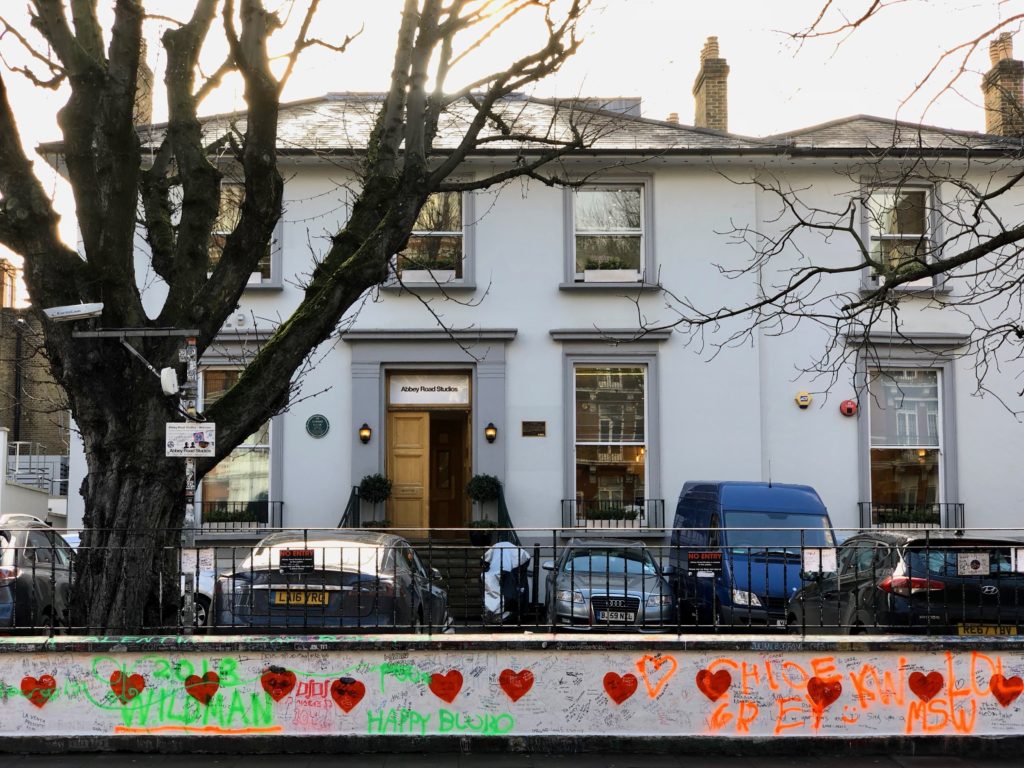 Although I enjoyed the company of old friends almost daily, my main objective to develop an arrangement with an editor to guide my book project failed, as the ideas of the person I engaged for advice were mundane and glib.  That was disappointing, especially as it was the second try with that agency.  No matter, I took full advantage of the art, culture and history that London offers.

The highlight of my cultural wandering was the Picasso 1932 exhibition at the Tate Modern.  He was a prolific painter whose work I have seen in museums in Paris, London and New York, but this exhibition focused on one year’s work of about 100 paintings, many of Marie-Therese Walter, a young woman with whom he was besotted. I bought a ticket that included lunch in the museum’s dining room on the 9th floor of new Blavatnik building. The exhibition was arranged in months of that year, the subjects changing with the seasons. Several paintings were sensually colorful distortions of Marie-Therese, such as the Girl Before a Mirror. 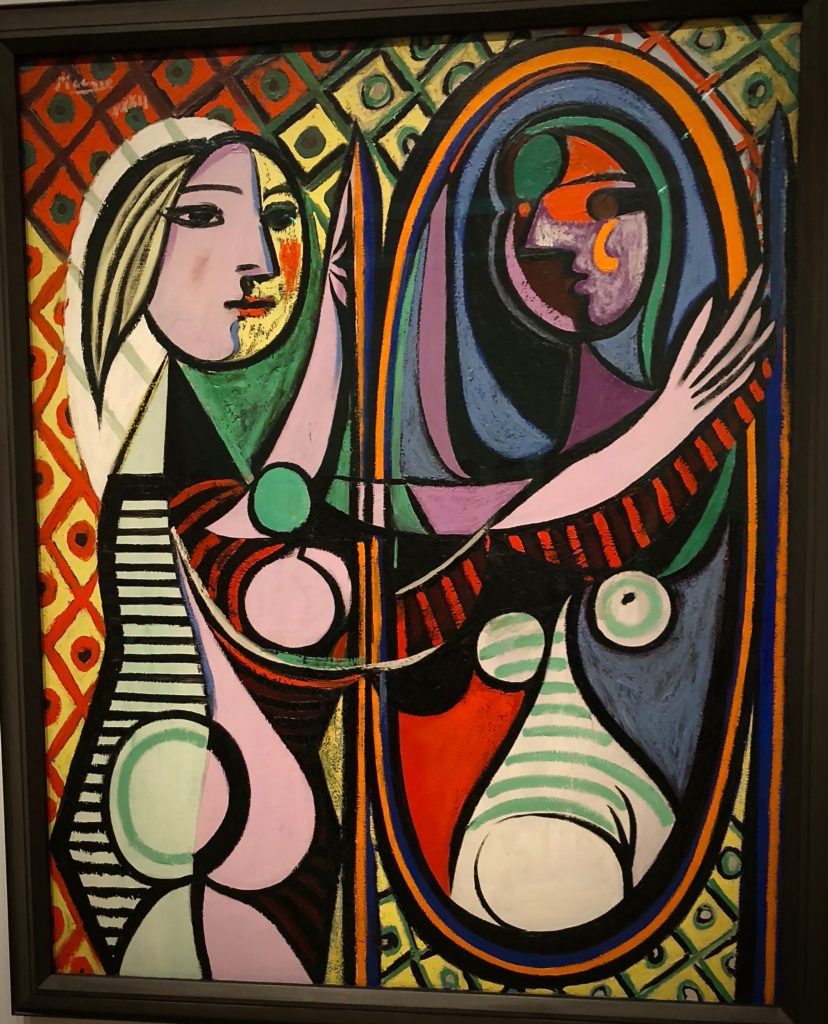 The set lunch menu offered dishes that Picasso enjoyed. I had the Brandada with an Egg Yolk and Samfaina Sauce: salt cod mashed in potatoes as in a bacalao with an egg yolk floating on top, and the Catalan version of ratatouille on the side. The waiter’s advice to mush it all together to blend the flavors proved good. My main dish was Seared Squid, Black Rice, Peppers and Almonds, another even heartier Catalan dish, dark and mysterious with a surprise in every mouthful. The dry Triennes Rose from Provence paired well, opening the flavors of the sea and land.

After wandering through the South and East Asia galleries of the British Museum, as I walked into the Great Hall for coffee, I noticed an exhibition titled “Living with Gods”. Its brochure said, “Humans might be naturally inclined to believe in transcendent worlds and beings”. I was not on the distribution list of that email. As an atheist, people who believe in god in the face of mounting scientific evidence against an omniscient creator, intrigue me. If faith, prayer and ritual help people get through the day, reduce stress and anxiety, fine. But intolerance for other approaches to living, cruelty, and violence have accompanied religions, unfortunately. The exhibition displayed objects symbolizing the main events in life such as birth and death, and the coexistence and conflict among faiths. Religion has had the great side benefit of inspiring art and music. In that vein, there were a few striking objects such as the Lion Man, carved from a Mammoth tusk about 40,000 years ago, among the earliest works of art. 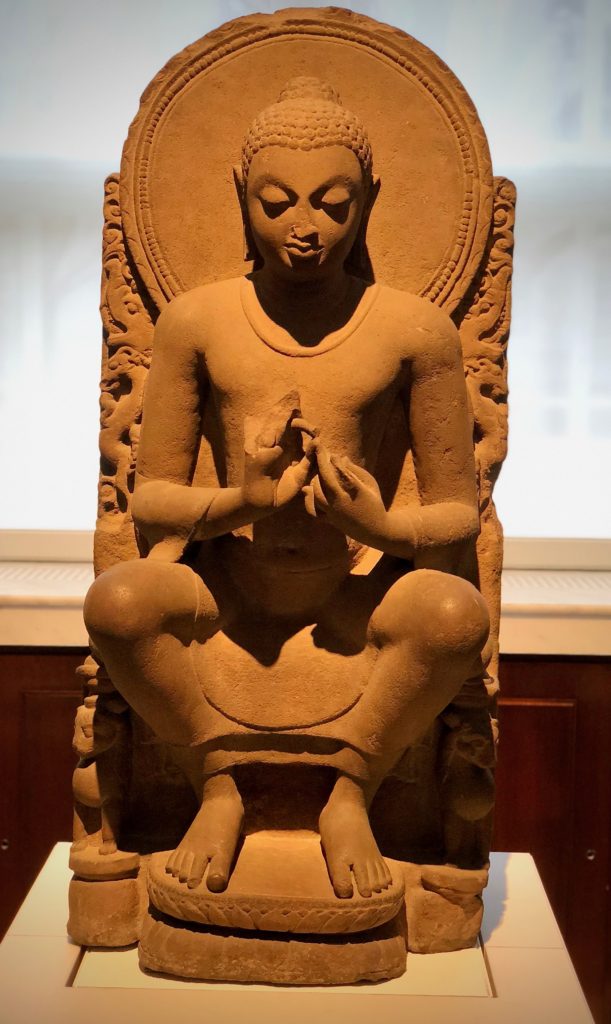 A reviewer of the Modigliani exhibit, also at the Tate Modern, wrote that his art style was copied from contemporary storied artists such as Cezanne, Picasso and Matisse. The first few galleries of portraits of fellow artists and lovers, mostly in somber colors, had cubist and abstract elements, but the gallery with voluptuous nudes painted in sensual colors was the most appealing. West African forms influenced (indirectly through Brancusi) his eye-catching sculptures of elongated faces with almond shaped eyes. Plagiarist or not, the visit was worthwhile. 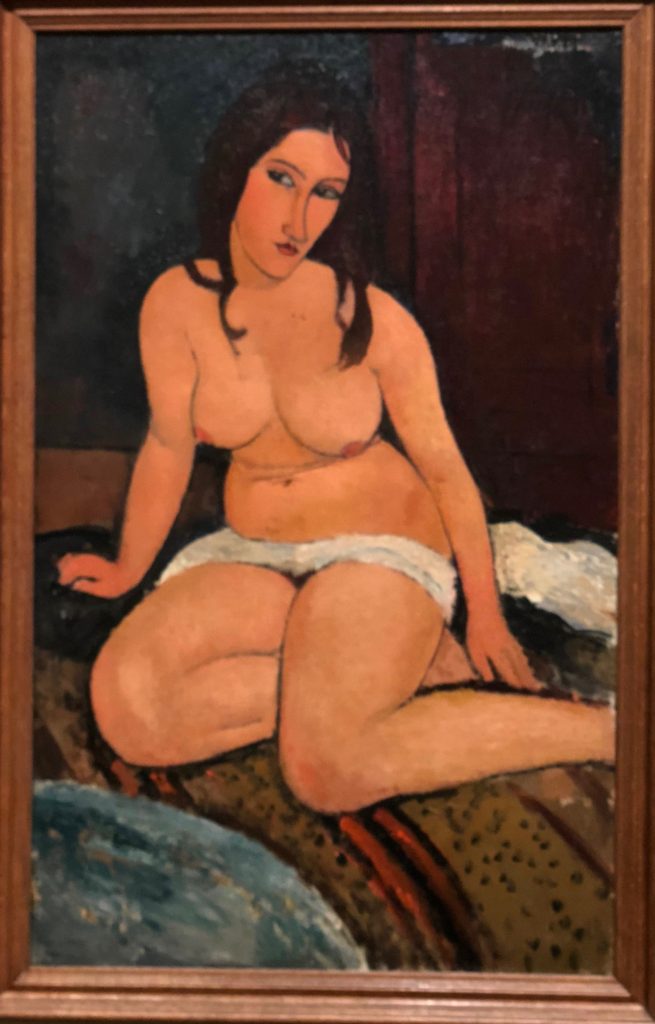 I was eager to see Macbeth at the National Theater because it was the play my class studied and acted at high school. Although I forget what I ate for lunch yesterday, I still remember many passages from the play, especially those of my tiny role, lacking thespian talent, as the second witch—“when the hurlyburly’s done, when the battle’s lost and won…”.   Despite renowned Shakespearian actors, Rory Kinnear as Macbeth and Anne-Marie Duff as Lady Macbeth, the ambition, guilt, remorse and the poetry of the writing did not come through with emotional depth. Kinnear fretted and strutted for three hours upon the stage and then was heard no more, thankfully.   To be fair, the show was in preview.

O’Neill’s Long Day’s Journey into Night was indeed long, a three and half hour marathon set in a sparsely furnished living room. Although Jeremy Iron’s sonorous voice was captivating, Lesley Manville’s performance stole the show with her incessant, agitated, compulsive and annoying chatter. Listening to a family living together while each one was living in isolation, often talking past each other, was emotionally taxing, but the audience remained riveted.   Fanny and Alexander is the theatrical version of the Bergman movie. The contrast between a joyful, warm and creative home and an austere, rigid and cruel one was stark. It was a strong performance by the entire ensemble. The set changes captured the dialogue’s emotions.

The new restaurants and pubs I tried offered mediocre food, but were expensive as prices were about 40 percent higher than in the San Francisco Bay Area. To make matters worse, I was overcharged twice—my bill had higher prices than on the menu. Alerted to this practice on my last visit in October, I looked at the bills carefully. This kind of annoying thievery probably occurs everywhere.  The fish in the ubiquitous fish and chips was fresh and moist, the batter varied in quality, but the fries were always large and soggy, which is how the locals prefer them, sadly. The fish pie I tried was dense, sat in my stomach for a couple of days. The Wet Fish Café in West Hampstead stood out slightly with a sophisticated menu, but didn’t pull of the preparation. Two well-traveled locals at the next table thought there wasn’t a destination restaurant in either Hampstead or West Hampstead. 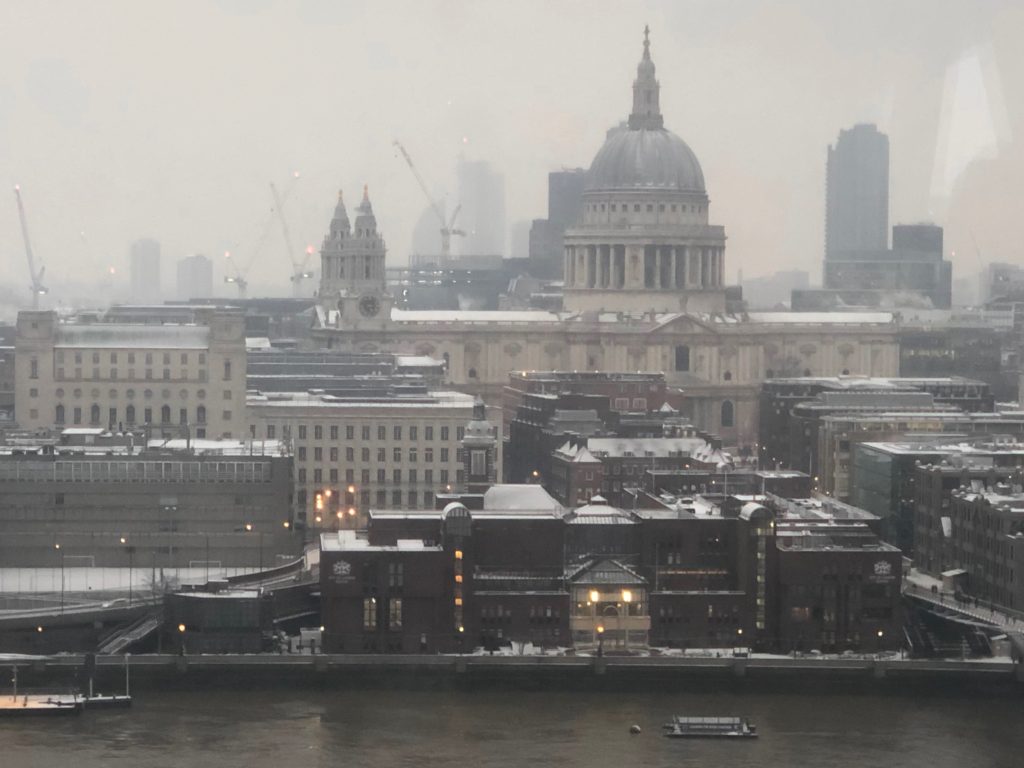 London continues to be an attractive international metropolis. Of the exhibitions and plays I saw, Shakespeare was the only native: none of the main religions originated in Britain; Picasso was Spanish-French; Modigliani was Italian-French; O’Neill was an American; and Ingmar Bergman was a Swede. So what is Brexit all about?