As usual, I misjudged the weather in San Francisco, forgetting it was 15 degrees cooler than North Marin. I was freezing and hungry by the time my friends and I were allowed into State Bird Provisions after a 45-minute wait outside. With little else to do except make periodic glances at our watches that were moving ever so slowly, we chatted among ourselves and with others. 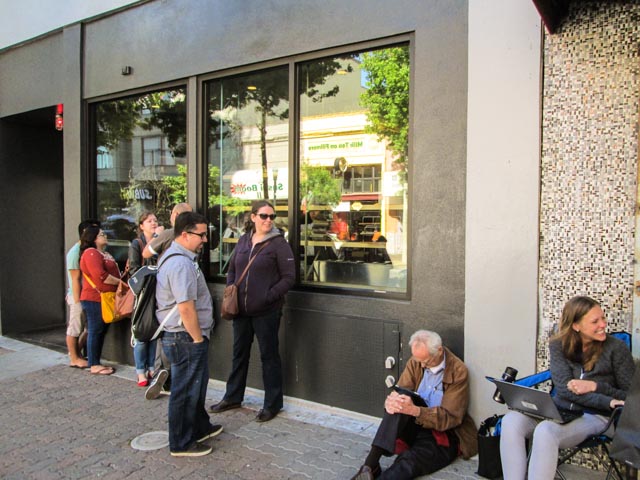 Encouragingly, a young woman in front, who had brought a folding chair for comfort, a laptop to keep busy and a backpack with drink and food for sustenance, told us that it was her seventh visit to the restaurant. The line swelled from about 10 in front of us to about 30 as groups joined their place-holders just before opening time at 5:30 pm. 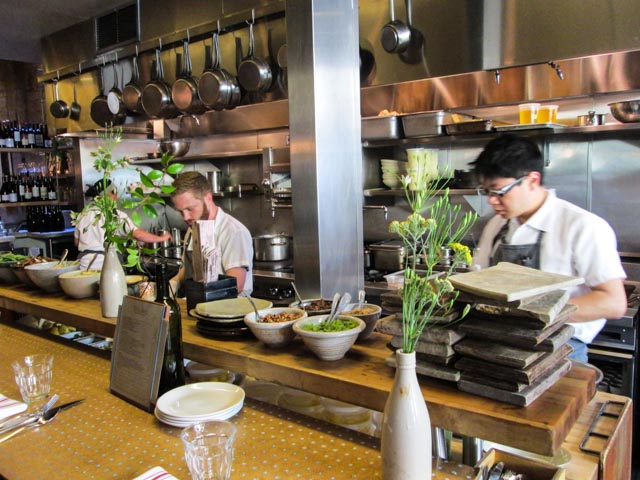 The restaurant allows reservations for half of its 60 seats, keeping the rest for the people who line up. I feared we would not get a table and have to wait even longer, but we were given a booth right away. In the end, waiting was easier than making a reservation two months in advance, guessing dates and juggling times to coordinate our travel schedules. 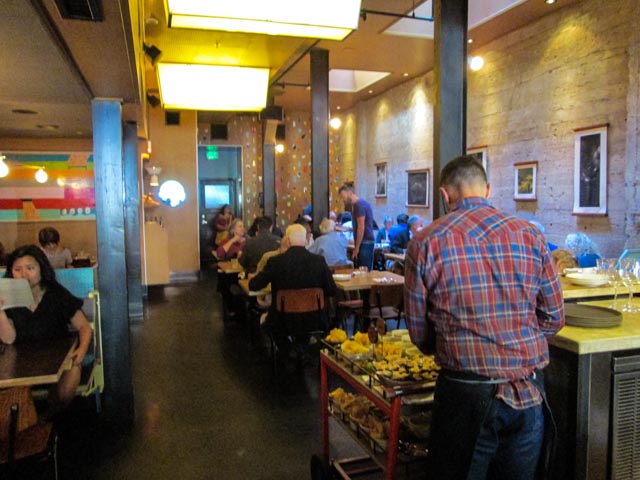 From the entrance, the open kitchen is on the right, separated from the booths by a counter with stools. It opens further back into a high-ceiling room with tables. The hay colored walls and shaded lighting help to illuminate the dark interior.

As we sat down, staff arrived to explain the restaurant’s approach to food and service. They would come around with several small plates, dim sum style, and we could sample whatever appealed to us and also order larger servings from about 10 options on the menu. Any staff person that passed us was our server. The informal arrangement worked well, especially as the first tray of food arrived quickly to assuage our hunger. Unlike dim sum restaurants, each tray displayed a card with the price of the item. 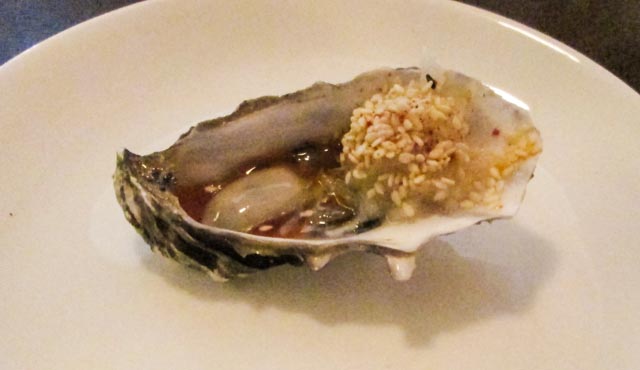 For three of us, we sampled seven small plates, three larger orders and a dessert. Every dish was unusual and prepared at a high standard, but a few stood out. Among the small plates, the Hog Island oysters with spicy kohlrabi (turnip cabbage) kraut and sesame were coolly fresh, with a light hit of spice enhancing the oyster juice—a perfect starter to wake up the palate. 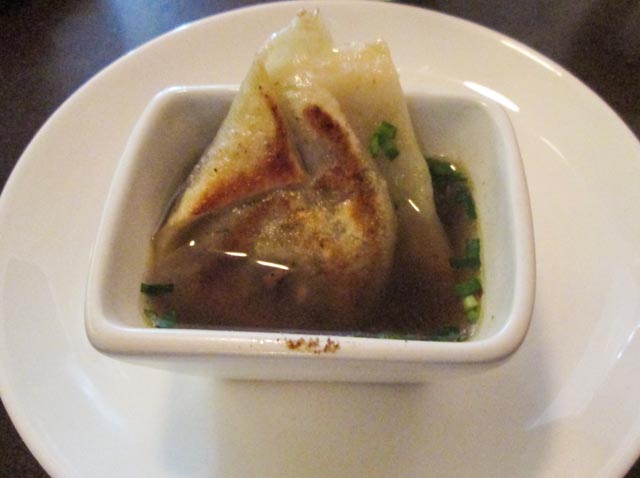 The dumplings with guinea hen (a darker and more flavorful meat than chicken) were still steaming when the aromatic broth was poured over them at the table. They exuded a rich, citrussy bouquet that lingered in the mouth with each bite.

We regretted not taking more of both of these dishes, but were curious to try the other alluring offerings that passed by, such as duck liver mousse with almond biscuits, pork belly pluot salad—highly recommended by the lady with the chair in the waiting line—creamy burrata with garlic bread, potato, shellfish and pickled nori porridge, and charred octopus with kampot peppercorns and tomato sauce. 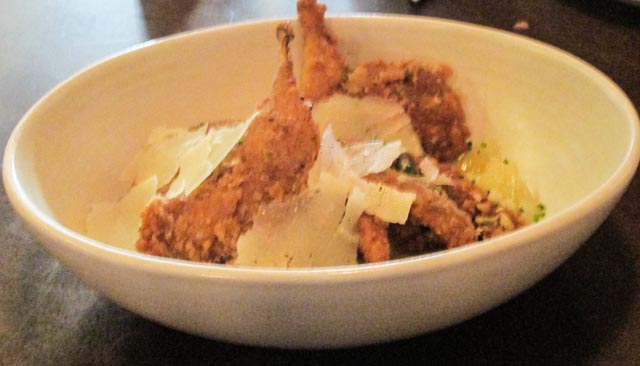 Among the larger plates, we could not resist ordering the restaurant’s eponymous dish, California State Bird with provisions, four quarters of quail deep fried in a buttermilk batter served on a bed of lightly fried, translucent onions and covered with Parmesan shavings.   The cheese blended well with the mildly gamey quail, moistened and smoothed by the onions. 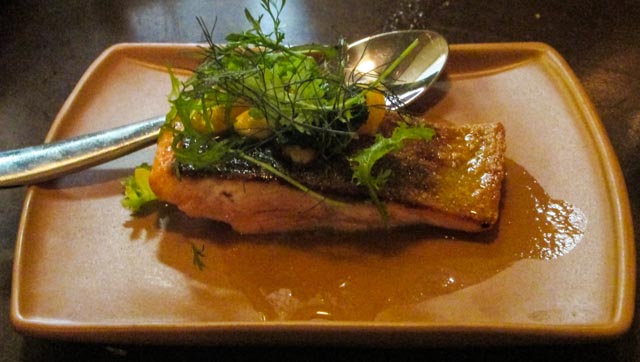 The outstanding part of the long-named dish—red trout with toasted hazelnut-mandarin-gurum (fermented fish sauce) vinaigrette—was the trout. It had gorgeous, succulent pink flesh that added to its delicate flavor, improved by a hint of the fish sauce. Yes, color can add to taste. 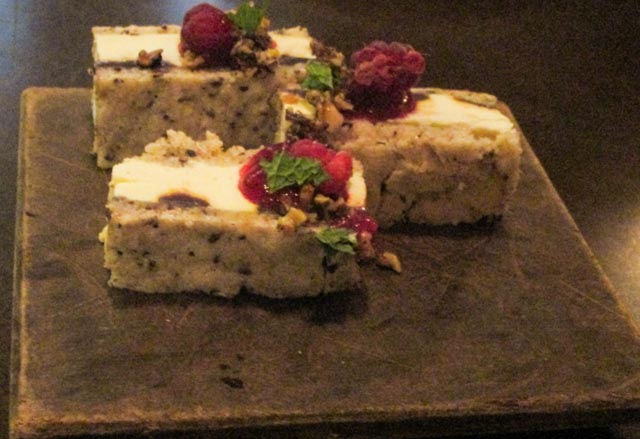 The ice cream sandwich combined chocolate caramel swirl, raspberries and walnuts in a crumbly biscuit with an occasional bite of mint. It was a fitting end to a meal with myriad flavors.

Libations included a bottle of Spatburgunder, a 2012 Pinot Noir from Rhinegau made by Robert Konig. One of my friends thought it lacked substance, but I found it light, elegant, and an excellent pairing with the seafood dishes, especially the trout.

The chef-owners, Brioza and Krasinski, assisted by chef de cuisine Glenn Kang, are now a celebrity team known for their innovative preparations and informal approach. They have a collection of awards including two Best New Restaurant and a Michelin star, enough recognition not to need a billboard with a name and address for the restaurant or for its neighbor, Progress, their new restaurant.

Street parking is available if you are lucky, but there are garages nearby as well.