I did not see an Emirati during my first day in Dubai. It’s population is a little over 2 million, but only 10-15 percent are Emiratis and the rest are mostly South Asians with a sprinkling of Phillipinos, Europeans and Africans. “Where can I meet Emiratis”, I asked a Pakistani during a metro ride. “Go to the Dubai Mall”, he responded. I did later in the day and indeed he was right. Women in black abayas and men in white dishdashas, shoulder to feet robes with matching headdresses, were sauntering around window shopping, sitting in cafes and some riding in golf carts through the huge mall.

The next day, when I was collected at my hotel for a desert safari, I noticed a young man in a dishdashas in the vehicle. I assumed he was the guide. After settling in, I asked if he was an Emirati. “No, I am Giovanni from Italy” he replied. With a dark beard, I could have sworn he was a local. When I explained that I was eager to chat with a local, Giovanni said “You have to work harder to find one, keep looking”. Anyway, I should have known that Emiratis are too well off to work as guides. I failed to chat with an Emirati during my four days in Dubai, partly because of their scarcity, but also because local rules of behavior that I was not conversant with made me hesitant to start a casual conversation. 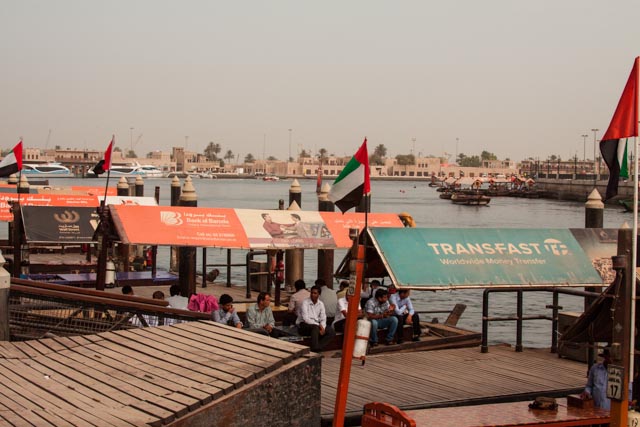 Dubai’s climate in July is hot, I mean seriously hot at about 115 F, and feels even hotter because of humidity. Few people walk the streets at any time, even early in the morning or in the evening, except intrepid tourists on city tours or in search of street level experiences. Every building and shelter is air-conditioned, the metro system especially, and also bus-stops. The half-mile walk to the metro from the hotel was a challenge at any time of the day.

The heat also causes pervasive ambient dust. Ruth Jhabvala’s novella titled “Heat and Dust” is an apt description for Dubai and Abu Dhabi. Both emirates have forests of fabulous modern architecture, but they are shrouded in dust, obscuring the details of individual buildings and diluting their collective impact. Like most tourists, I took the rapid elevator to “At The Top” on the 124rth floor of the Burj Khalifa, the World’s tallest building. The immediate vicinity was barely visible and it was not possible to get a sense of the whole city and its environs. Another tourist warned me not to pay $135 to go up further to the 162nd floor, which does not provide a 360 degree view and is open mostly towards the fogged desert. 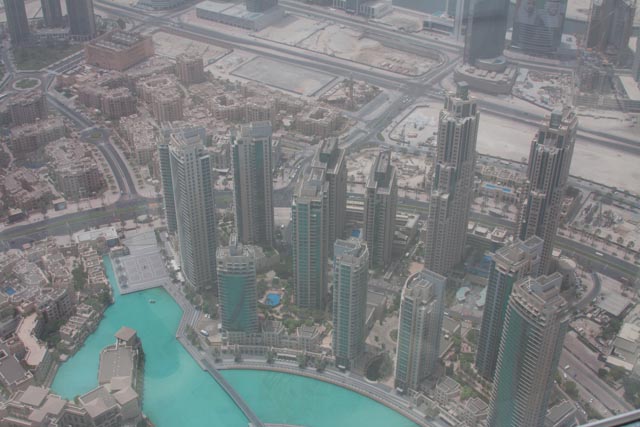 View from “At the Top”

At street level, the modern architecture is stunning. Dubai has more skyscrapers over 667 meters (3/4 km) high than any other city. The architectural style is largely modern Islamic or has a regional theme– Burj Khalifa’s design is based on the geometry of a desert flower. But the work of international architects such as Norman Foster and Zaha Hadid are also visible. The towers’ designs are rounded, curved, oval, jigsaw shaped, acutely angled and made with steel, glass and concrete in varying proportions. The iconic structure recognized across the world is the Burj al Arab, a hotel shaped like a sail that sits on a beach at the edge of the Persian Gulf coast. Entry to the hotel requires a reservation in advance and a minimum payment of $95 for drinks or $170 for tea, offers I declined to accept.

My hotel, Park Regis Kris Kin, was located at the fringe of Bur Dubai, the old town. One very early morning I took a subway to the heart of that neighborhood and walked along Dubai Creek, broad enough to be a river. It was lined with dhow-taxis to cross to Deira on the other side. On the right side along the creek, were older small shops selling clothes and other dry goods that were just opening and placing their wares on display. A small arcade supported by wooden pillars carved with Islamic designs harked back to an earlier era. The left side had several preserved older buildings with simple desert architecture made with mud-colored sandstone and clay and decorated with lattice screens, including the sheik’s old palace, museums, art galleries and a cafe. I walked through a gallery and the Heritage museum that displayed local habitats prior to Dubai’s prosperity. 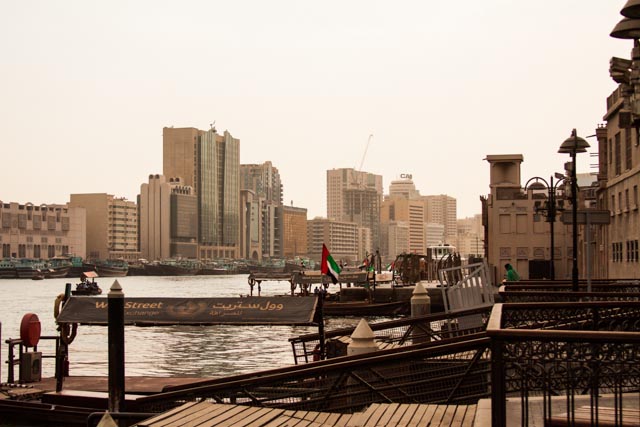 I went on organized city tours of Dubai and Abu Dhabi. They were mainly drive-bys with occasional short stops. In Dubai we drove through the Palm Islands, a development on reclaimed land shaped like a palm, Jumeirah Beach with Burj al Arab at one end, the Emirates Mall with an indoor ski run, and a boat ride across the creek to the gold and spice souks. The Dubai Museum, located in an 18th Century fort, has galleries with dioramas depicting the daily life of Bedouins and a video of Dubai’s development after oil was discovered. 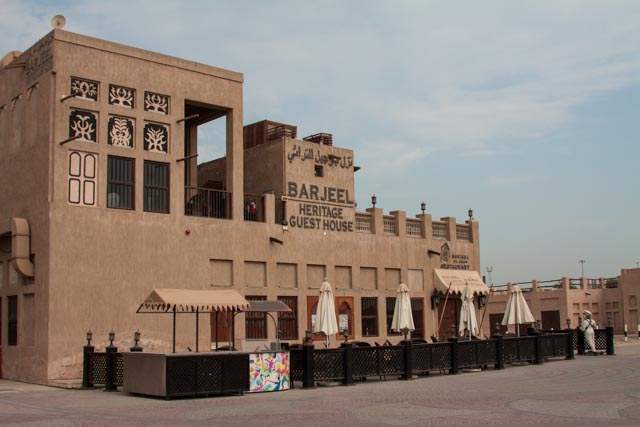 Abu Dhabi is a two-hour drive from Dubai with not much in between except some industrial parks and desert. As I was the sole passenger, I chatted with driver/guide who was an educated young man from Kerala in South India. I asked him what brought him to the Emirates. He said that competition for jobs was stiff back home as everyone was educated. In Dubai, he had the opportunity to earn well and save enough money in a few years to start a business in Kerala.

The main sight, the Sheik Zayed Grand Mosque comes just before Abu Dhabi. It is indeed a grand mosque, all in white marble, with a courtyard that can accommodate 40,000 worshippers, defined by arcades on three sides with pools on the outside, reflecting the arches when lit up at night. Persian, Moghal, Arab and Moorish designs inspired its architecture and workers and materials to build it came from many countries. Inside it has the world’s largest hand woven carpet from Iran and each of seven halls has a huge ornate chandelier made with millions of Swarovski crystals. Walls have floral insets with leaves and petals made from precious stones like in the Taj Mahal. 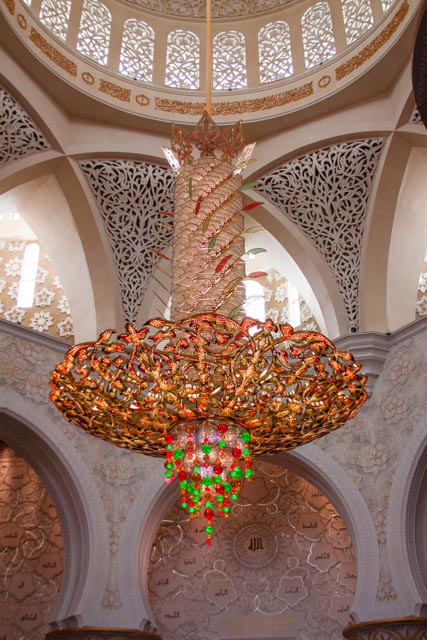 Abu Dhabi looks similar to Dubai, perhaps with fewer clusters of high-rises, but also shrouded in dust. We drove through prosperous areas with palaces and huge villas bordering a marina full of parked yachts and stopped at the Heritage Village, a bigger version than in Dubai, with dioramas displaying life before modernization. Other stops included the Emirates Palace Hotel, an enormous establishment whose frontage brought the Umaid Bhavan palace in Jodhpur to mind. Unlike that palace, the hotel has a beach at the other end and, unusually, a vending machine that dispenses gold; Ferrari World, a theme park set near others of its ilk, but devoted to cars obviously; and an obligatory mall. On the way back to Dubai, we passed an area that hosted several international university campuses, including New York University and Paris-Sorbonne University, and signs for the construction sites of the Guggenheim and Louvre museums.

My final tour was a desert safari, a roller-coaster ride in a Toyota Land Cruiser up and down the dunes just outside Dubai. It had exciting moments, but it is the vast, endless desert that was striking. Emerald green bushes shooting out from the golden sand here and there were surprising signs of vibrant life, challenging the aridity of their surroundings. We passed a camel farm just before our destination, an enclosed circular camp with stalls lining the sides offering drinks, snacks, henna painting, photos in Arabic dress and so on. Outside, desert skis, camel rides, and dune buggies were available for hire. 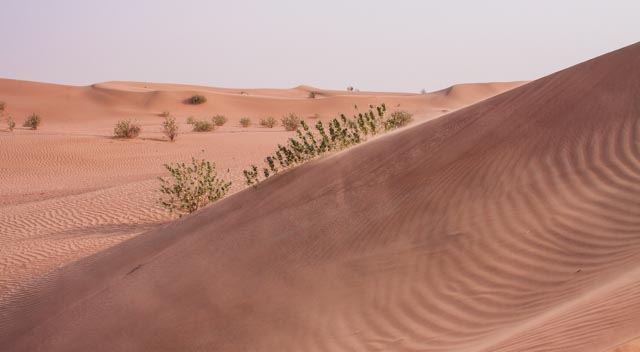 As the tour operators are South Asians, and most tourists probably come from South Asia or the Middle East, malls and theme parks feature prominently in tours. Dubai Mall is proudly advertised as the biggest in the world with 1,200 stores that include all the World’s top brands. I would wager that it’s also the most expensive. Avid shoppers could spend days there without getting bored. It had 65 million visitors in 2012, more than New York City’s 52 million. It also sports a huge aquarium with 33,000 marine animals on display.

My hotel was among the few high-rise buildings in the area that mainly comprised of four or five story buildings with shops and restaurants at the street level and apartments or offices above. Streets were clean and restaurants and shops were well-appointed, conveying a level of affluence. As the residents were almost entirely South Asians, the area gave a picture of how Pakistani and Indian cities would look as those economies develop. Reflecting the ethnicity of the residents, restaurants mainly offered South Asian food, but local shawarma diners and fast food restaurants were also available.

Dubai and Abu Dhabi historically relied on trade, especially in pearls, but have become rich after oil and gas was discovered. Both Emirates have diversified their economies into construction, real estate, tourism, finance, trade and commerce that now contribute large shares to GDP. The income per person in the Emirates is comfortably over $40,000 per citizen. Abu Dhabi still has substantial oil and gas reserves and the world’s largest sovereign wealth fund. Dubai’s oil and gas reserves are much smaller and revenues from that source comprise just 5 percent of total government revenues. The Emirate’s wealth has been used to build superb infrastructure–roads, metro, rail and bus systems, airports and airlines, which are among the busiest and best in the world. The passage though Dubai airport—immigration and baggage—remains at a third world pace, however.

Immigrants come for jobs that pay good, tax free incomes. Foreigners can buy property in Dubai, but cannot own businesses outright—they need a citizen partner who must have the majority share. Dubai is considered one of the best places to live in the Middle East, but foreigners have to conform to local behavior norms. Human rights violations against the mostly South Asian laborers are a blemish on its reputation.