Review of “The Son Also Rises: Surnames and the History of Social Mobility” by Gregory Clark

This article focuses on the India chapter of the book because it was written for publication in “India Today”, an Indian magazine, in which it appeared in the November 23rd issue.  The  book presents a substantial analysis for each country mentioned below.

Rags to riches stories are anomalies according to Professor Clark. Simulations for 500 families over 50 generations show a persistence rate of 81 percent for the high status and low status groups for the past 10 generations, although the path for individual families varies widely. Nature clearly trumps nurture.

Professor Clark posits a simple law that governs social mobility and is independent of a country’s social structure or its government policy: about 70-80 percent of a family’s social status depends on its previous status and the rest is a random component. There is a biological convergence towards the mean from the elite and underclass, but the process is slow as it relies partly on intermarriage among social groups and may take hundreds of years.

He tests this hypothesis successfully by analyzing reams of data, going back hundreds of years in some cases, from medieval and modern England, the United States, Sweden, Chile, Taiwan, China, Japan, Korea and India. For unsurprising reasons elaborated below, the inter-generational persistence rate in India for any social class is about 90 percent, higher than in any other country.

His results are controversial as many studies show a much higher level of social mobility, but its especially alarming for Sweden and China. In Sweden, despite much lower inequality in wealth and income than other developed countries and free education for all citizens through university, the elites from the 18th Century persist. In China, Chairman Mao’s “class enemies” remain strongly entrenched in the current communist party and government.

Why are Professor Clark’s results so different from many recent studies of social mobility? Well, his approach differs from the conventional analyses. They focus on one or two characteristics of social status such as income, wealth, education, occupation and longevity for individual families for just one or two generations. Each aspect of this approach—one or two characteristics, individual families, and a short time period—has elements of chance that interact to increase the probability of errors.

Professor Clark’s analysis reduces these chance elements by using surnames as the mark of social status because they capture the unobserveable underlying genetic components, “social competence of families” as he calls it, that drive the observable characteristics of achievement mentioned above. He also groups the surnames into categories of social class and his analysis covers a much longer period.

His main analysis for India uses data from Bengal from 1860-2011 because it was available for a long period. The state has a mix of castes and religions that are representative of the whole country. He divides surnames into Kulin Brahmin, Other Elite Hindu, Scheduled Caste Elite, Mixed Hindu, Muslim and Poor Hindu. He finds that in representation among physicians and judges, Kulin Brahmins are the most over-represented, but Scheduled Caste Elites are also somewhat over-represented while Muslim and Poor Hindus are dramatically under-represented.

The reservation system, that gives disadvantaged groups preferred entry into universities and jobs, has not been effective. It has, however, helped a small, moderately prosperous group achieve over-representation because the British arbitrarily classified these surnames as untouchables. For that reason, the reservation system may be restricting mobility by helping just this small group. Essentially, there has been little social mobility in Bengal—the average inter-generational persistence rate for all classes is nearly 90 percent. 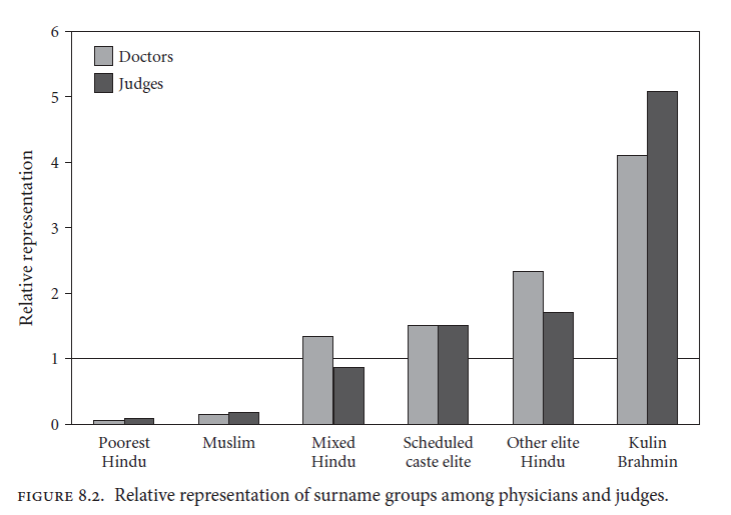 The mobility rates for Bengal are the lowest observed, lower than pre-industrial England, Sweden or China. The main reason for this is the extremely low rates of intermarriage between the elites and underclass and religions. Caste and religious endogamy is very high and persists today, although the Economist magazine September 5th issue (page 43) reports, that with increasing urbanization and the spread of information technology, it is beginning to show cracks. Nevertheless, 90-95 percent of Hindus still marry within their caste.

Indians in the US are pretty much the top of the heap mainly because of the selection bias created by the US policy that favors highly educated immigrants. Professor Clark identified groups of elite surnames of doctors in the US from several countries. It shows that Hindu and Christian Indians are over-represented tenfold relative to their populations and bested only by Egyptian Copts. His analysis suggests that an elite group in any country will tend to retain that social status in any other country it migrates to. Because of the social status, size and education of the Indian diaspora, Professor Clark predicts that it will be solidly ensconced in the elite social groups of the US in a couple of generations. 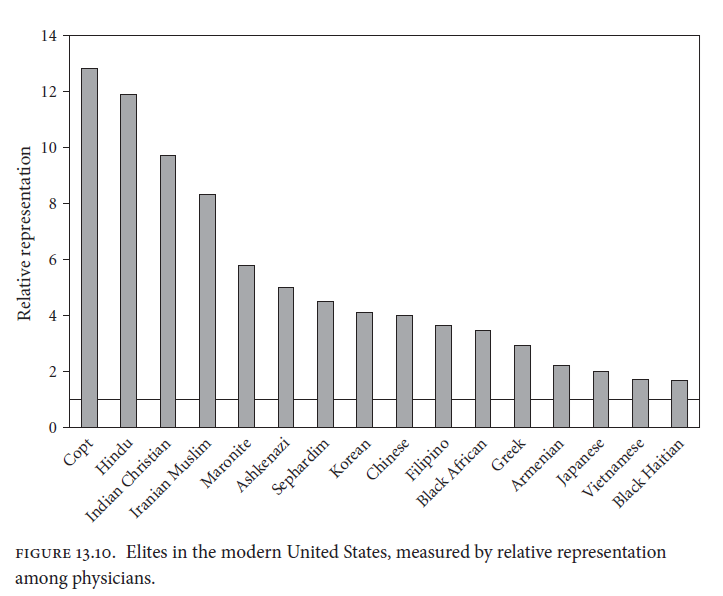 When it comes to policy implications Professor Clark is not helpful. Because elites should be confident of their status, he thinks they may be willing to be fair, earn less and redistribute more. As elites dominate the political economy of democracies, there is not much chance of that happening, especially in diverse and populous countries. It’s like asking landowners to enact land reform. Promoting intermarriage across social groups is a potential answer, but that is voluntary and would take a very long time, especially in India where caste and religious barriers are formidable.

Clark’s analysis throws shards of complexity into social mobility, an important pillar of liberal democracy, suggesting that hard work and education can make everything possible for anyone. He doesn’t deny its existence, but suggests it moves through generations as slowly as treacle and nudging it does not make it go any faster. He bases his analysis on the connection between genes, surnames and the social competence of families. Without expertise in the subject, it is difficult to parse the conflicting evidence on genetic inheritance affecting life outcomes.

Nevertheless, even if his conclusion is accepted, social and economic policies can keep the embers of social mobility aglow. Well-designed reservation policies at education institutions have shown good outcomes in some countries.   At the very least, more people with higher education and professional training will facilitate intermarriage between religions, classes and castes. And economic policies that promote growth combined with effective redistribution are likely to benefit society as the small relative loss in income of the few very rich could benefit greatly the many who are poor.

One Response to Review of “The Son Also Rises: Surnames and the History of Social Mobility” by Gregory Clark