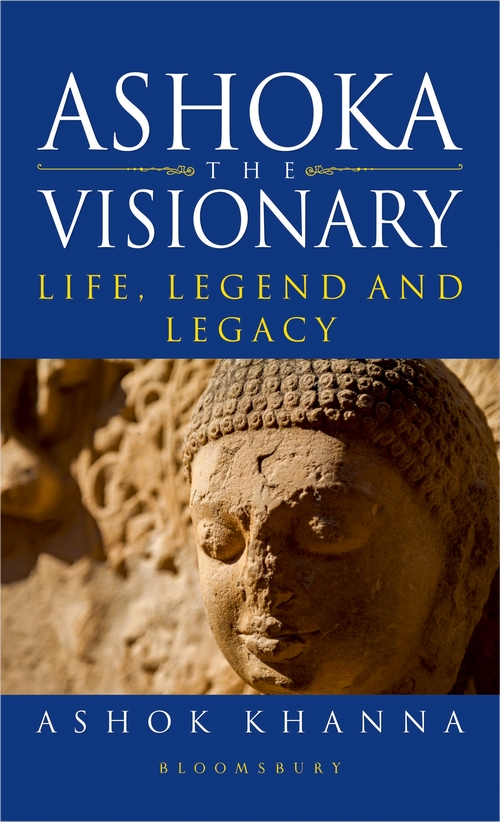 Ungainly in appearance, disliked by his father, the king, but nurtured by his mother, Ashoka worked to elicit his elders’ approval. At the age of 18, his father sent him to quell a rebellion that his brother, the crown prince, had failed to do. His success propelled him to be appointed as viceroy of a province. There he met Devi, a beautiful, devout Buddhist. With the death of his father, supported by the chief minister, Ashoka was crowned the new king.

Ashoka ruled the Indian subcontinent from 269 bce to 232 bce. After the Kalinga War, a turning point for Ashoka, his devotion to Buddha’s teachings became unconditional, and he based his governance on its precepts of non-violence, tolerance and compassion. His support for Buddhism helped it grow from a small sect to a world religion. When it spread to Asia, his model of Dharmaraj was emulated as exemplary kingship by many Asian rulers through history.

Prime Minister Nehru, in The Discovery of India, described Ashoka as ‘a man who was greater than any king or emperor’. He worked to incorporate Ashoka’s secular approach and considerate administration in India’s Constitution. As a young democracy, India must adopt both Ashoka’s and Nehru’s vision of compassionate governance to mature as a nation.

Too few in India or around the world know who the great Emperor Ashoka (Third Century BCE) was, what were his accomplishments, thousands of years ahead of his time, and what were his extraordinary deeds and edicts. This excellent book fulfills that need successfully, and in our times of widespread distrust of governments all over the world, holds up this great emperor and his world as a prime example of what good governance has accomplished in the past, and what we need to recover to survive the challenges we face. I highly recommend this book!’  Robert Thurman, Professor of Buddhist Studies at Columbia University

“I have known Ashok Khanna since my earliest memories, and since his earliest memories Ashok Khanna has been in pursuit of Ashoka. This book is the culmination of the journey of a lifetime: a passionate, heartfelt, thoughtful, and personal inquiry into a figure of enormous significance not just for our past, but for our future, too.”  Mohsin Hamid, author of “The Reluctant Fundamentalist” and “Exit West“, both short-listed for the Booker Prize.

“Over 70 years ago, Winston Churchill, quoting George Santayana, observed that those who fail to learn from history are condemned to repeat it. So it is with the link between governance and economic development. While the study of governance and institutions is now acknowledged to be a foundation of the development of nations, its long history is often ignored. The story of Ashoka, told with an eye for its relevance to the modern world, is one such history. The author reminds us that human rights, respect for nature, and non-violence are universal and timeless values, and provides warnings of what transpires when these are ignored.” Dr. Homi Kharas, Interim Vice President and Director, Global Economy and Development, BROOKINGS, Massachusetts Ave, Washington, DC

“Ashok Khanna has written an original and personal account of his intellectual and personal encounter with the thought and life of the great 3rd Century BC Indian  Emperor Ashoka, whose message of non-violence and care for all sentient beings is more urgent than ever.’ Bruce Rich, Author of “Ashoka in Our Time: The Question of Dharma for a Globalized World”  (Penguin, 2017)

‘This book takes us on a fascinating odyssey of Ashoka’s life as an Indian Emperor in the third century BCE. It introduces us to his ideals of governance which closely approximate to a contemporary human rights vision.  By spreading the word of this episode in Eurasian political theory and practice, Ashok Khanna corrects a tendency to hubris regarding the uniqueness of the European Enlightenment as a source for ideas of human rights and at the same time provides a crucial antidote to contemporary claims that human rights are a creation of Western imperialism and not applicable to other cultural systems. Dr. Frances Raday ’President, Concord Research Center for Integration of International Law in Israel, The Haim Striks School of Law, COLMAN, Professor of Law, Emerita, Hebrew  University; Honorary Professor Univ. College London; Doctor Honoris Univ. of Copenhagen, Formerly: Special Rapporteur, UN Human Rights Council; Expert Member, UN CEDAW Committee

A highly informative, instructive, and enjoyable account of the life of a great king. Ancient history comes alive in these pages; and there are lessons in compassion and tolerance here for today’s world. M G Vassanji, Author of “The In-Between World of Vikram Lall”.

“We live today in a spiritual wasteland in which religion is often just the handmaiden of politics.  We need to learn from true leaders of history such as Emperor Ashoka about the meaning of existence, the way forward as individuals, and the way to integrate religion with the social, political, and economic systems engulfing us.  Ashok Khanna’s Ashoka, the Visionary: Life, Legend and Legacy is an important beginning step for us to understand the past as way to make a better future.” Jack Weatherford, former DeWitt Wallace Professor of anthropology at Macalester College in Minnesota and author of “Genghis Khan and the Making of the Modern World”.