With street names like Armenian, Acheh, China, Burma, Bangkok, Tamil, Farquhar, Kimberley, one would expect to be in an international city. George Town is just that. It is the main urban area of Penang, an island off the coast of Malaysia, to which it belongs. The inner city, a UNESCO World Heritage site, has a population of half a million people but the metropolitan area has 2.25 million, many more than I expected before I visited.

Captain Francis Light of the British East India Company, who features prominently on street names, statues and buildings, landed in Penang in 1786 and astutely married the daughter of the Sultan of Kedah, to whom it belonged. He received the island as part of the marriage settlement, but later ceded it to the British Government of India. In 1876, it came under direct British rule as a colony and then became a part of Malaysia at independence in 1957.

George Town was named after King George III. It was a trading post with shipping, port, wholesaling and banking as prominent activities and those commercial buildings and areas remain. The inner city is mainly colonial era shop-houses where people lived behind and above their shops. Walking through town, most of these are still evident and in need of renovation, but some restored buildings such as the Seven Terraces Hotel show the majesty of earlier times. In the past decade, an effort to conserve historic structures has gathered momentum and prices have shot up too. 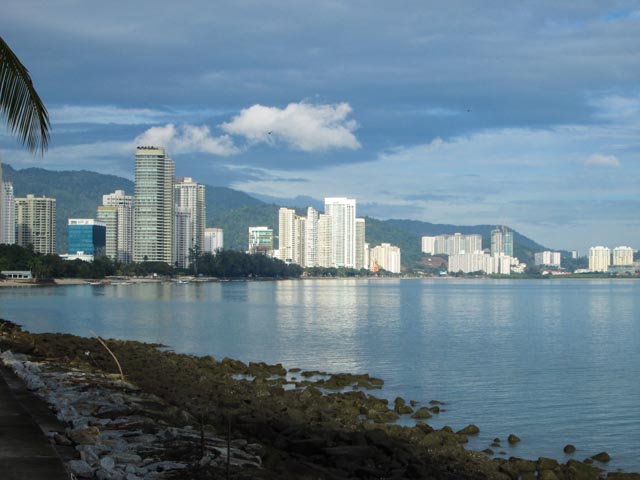 View from Eastern and Oriental Hotel

Early morning is a good time to start walking though the old town. The climate is amenable to a long walk as it gets hot and humid with the rising sun. Not far from my hotel, along the entire length of Jalan Kuala Kangsar, an active morning market starts before daylight, offering fresh seafood, vegetables, prepared food and dry goods. The street is bright with stall lights and busy with people touching, sampling the goods, doing the day’s shopping, especially the many restaurant owners. Confusingly, almost every restaurant’s name starts with Kedai Kopi (coffee shop) followed by the name of the owner usually. It was not easy to find restaurants recommended in the guide-book. 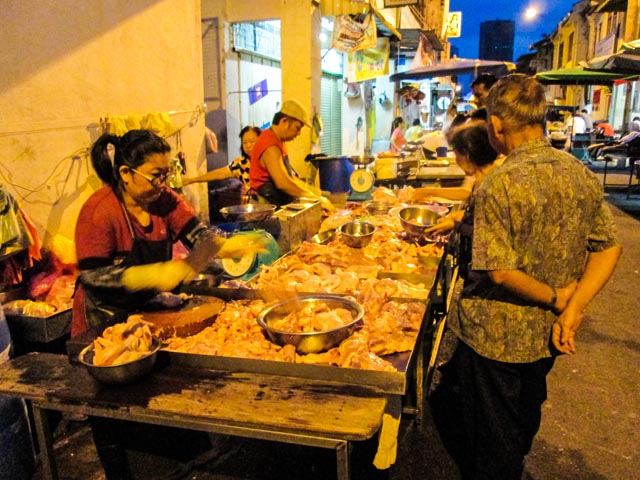 As daylight emerges, walking along Armenian Street (Lebuh) and its off-shoots, bright mural street art and heavy wire sculptures on the side of house walls become visible–an Art Walk on maps guides people especially interested. Strolling along the streets, I passed houses that were converted into museums where Sun Yat Sen spent time; Chinese Clan associations met; Chinese ancestral temples; and the majestic Peranakan Mansion that belonged to a prominent family, exhibited their period furnishings, accessories and family photos. 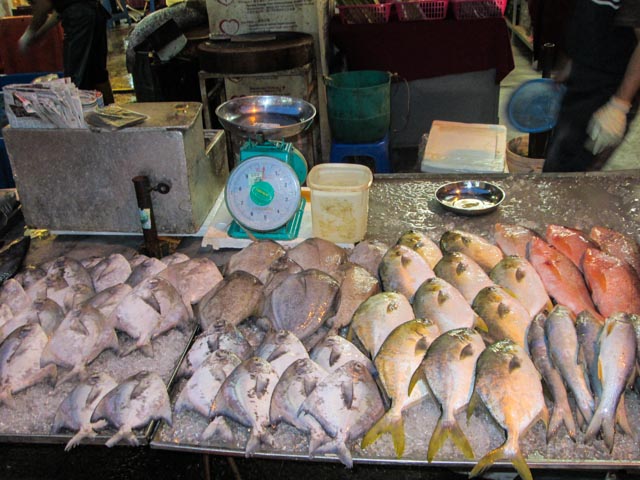 Sounds of Hindi film music drew me to Little India close by. Shops offering saris, jewelry, Indian kitsch and many restaurants advertising a dosa breakfast opened up. The walk continues into the commercial area and along the water where Chinese Clan jetties protrude a hundred yards into the sea with small family houses one after another along the length of the pier. I stopped at the Old Town White Coffee Shop, its elegant dark-wood furnishings set against white marble table-tops under a white beamed ceiling studded with fans, to sip steaming hot white coffee that was strong and flavorful, a local specialty. 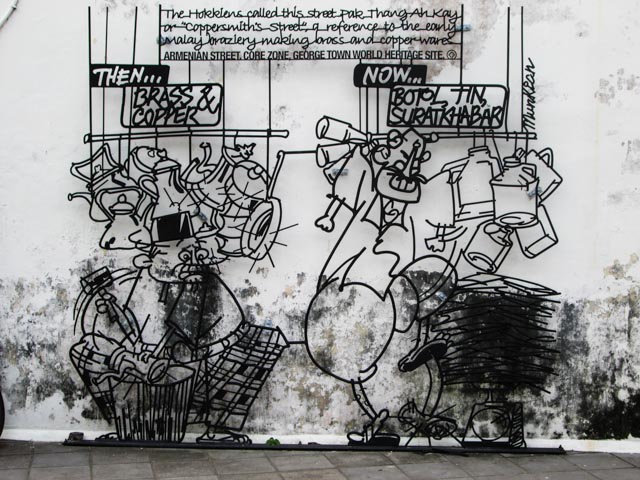 The northern belt of the town retains a colonial architectural majesty with an impressive Victorian City Hall, Supreme Court, Penang Museum, churches and mansions, some converted into museums and restaurants where I had great meals. Among these magnificent buildings is the Eastern & Oriental Hotel built in 1885 by the Sarkies brothers of Armenian origin, who also built Raffles in Singapore and the Strand in Yangon. I had a morning coffee in its outdoor café overlooking the sea, in the company Hermann Hesse, Somerset Maugham and Rudyard Kipling’s ghosts.

There are tourist sites farther afield, such as the Kek Lok Si Buddhist Temple complex, the largest in South East Asia, set on a hill, with its architecture showing the influence of several countries. On one side is a huge Buddha statue looking at the town; the frightening steep funicular tram up to Penang Hill to get a panoramic view of the island; and the botanical gardens, which I did not visit. 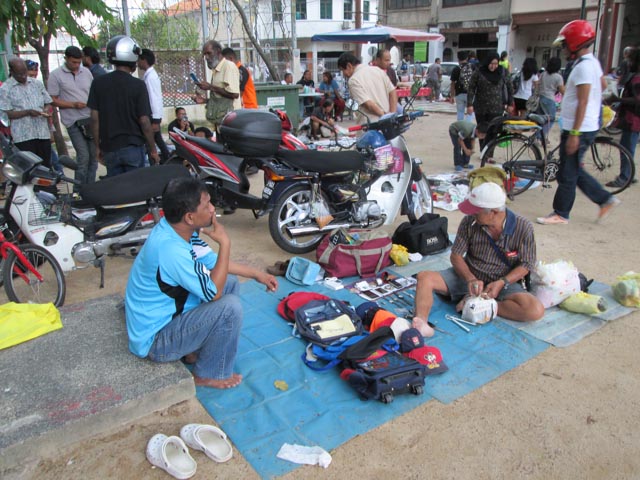 And there are beaches. They start not far out of the inner city at the boardwalk along Gurney Drive backed by imposing high-rise buildings that include malls and hotels, and further along the coast by coves, through Tanjung (cape) Bungah to Batu Ferringhi (foreigner’s rock) with its side by side resorts stretching for miles.

I took my hotel’s shuttle to a sister resort, both part of the Shangri-La group, to spend hours on the beach. That stretch was about a mile long and 50 yards deep. It was busy with tourist shops, restaurants, massage sheds and people from many countries—Australia, the UK, Arabia, South Asia and Russia. Quite a mélange, mostly in beach-wear, except for Arabs and South Asians, their ladies wearing hijabs and saris and Arab men, jalabiyyas. The water was warm, but somewhat muddy, not as inviting as Caribbean blue. Areas in front of resorts were netted to keep jelly fish out, creating swimming pools in the sea.

The majority of Penang’s residents are of Chinese origin, but Malays and Indians also live there in significant numbers. The Penang Museum displays the history of these communities and the British in photographs, paintings, including by Daniels who is well known for his lithographs of India, and other objects. Most Indians are from the South of the Subcontinent who came as laborers, and Sikhs who came to man the security forces. I passed mosques, churches, Hindu and Buddhist temples and breakfasted on a paratha and raita at a Sikh Gurdwara. There, I chatted at length with Sukhinderpal, a lawyer, who related the history of Sikhs in Malaysia. These communities have coexisted amicably—trade and commerce have trumped ethnic and religious differences. 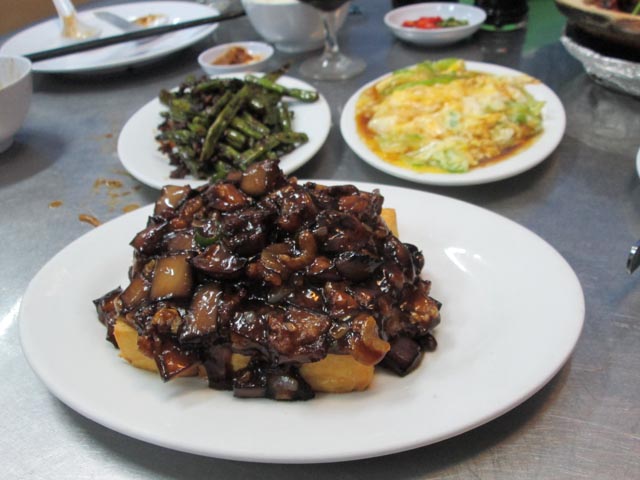 Because of its multi-ethnic residents, Penang’s food is one of its main attractions. Its street food gets rave reviews. I tried Char Koay Teow (fried noodles with shrimp and vegetables), Hokkien Mee (soup with noodles, seafood, vegetables and other unknown ingredients) and Assam Laksa (a spicy, sour soup with complex spices, including tamarind, herbs, shrimp, vegetables) several times. When done right, their taste was unusual and exciting, but in many places the fried noodles were too oily and Laksa over-spiced.

I had some memorable meals in elegant settings with high ceilings and white table-cloth service such as in Mansion 32 and the Blue Mansion. Both menus included a combination of Western and local dishes prepared to a high standard. But my best meal was with friends who knew what to order at the simple Homestyle Restaurant in Tanjung Bungah. We had Egg with Bitter Gourd, French Spring Beans with dried Prawns, Mango Chicken, Tofu with Aubergine, Claypot Noodles with Oysters and Calliope Zhengzhou pork ribs with soybean sauce, the feast for about $20.  The Indian food was disappointing, however, even in a restaurant recommend by locals. Although Tamils are the main South Asian population, the dosai were limp and soggy and sambar tasteless. The cuisine’s reputation was saved by the excellent paratha at the Gurdwara.

Browsing online, there was a range of reasonably priced hotels and resorts. The Jen Hotel, where I lodged was perfectly located for walks around George Town and its shuttle to the Golden Sands Resort was a bonus. Getting around on Penang’s Rapid buses was easy, especially as the main junction was close to my hotel. Regular free buses covered the inner city and they were clean and air-conditioned and other buses were cheap. 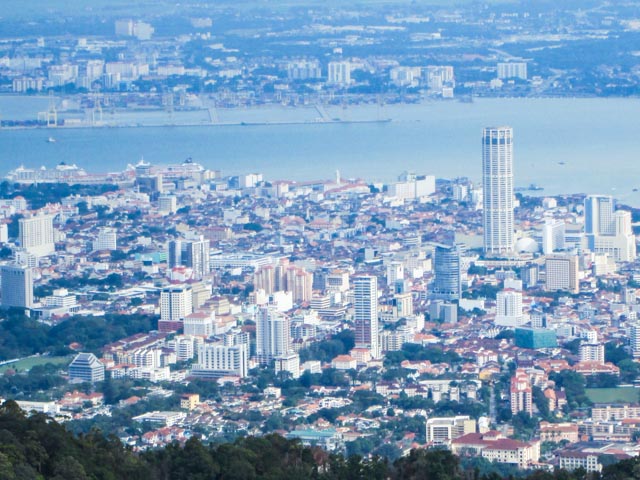 Penang is deservedly rated high in the list of places for Westerners to retire: the Malaysian government provides a hospitable visa, security is good, several hospitals are accredited by the British National Health Service, airline connections are extensive, the climate is tropical, beaches are easily accessible and a variety of good food is readily available.