I lived in New York in 1969-70 and again from 1977-84. In the earlier stay, I worked as a professional in the financial district, earned well, caroused a lot, got to know the city from that lens. In the second stay, I was a sedate academic, marathoner, much more interested in the arts, which gave me a different view of the city. I’ve visited almost every year since, and whenever I do, I find myself assessing whether I should move back. I love its intensity, diversity and cultural offerings.

After my week at the US Open Tennis Tournament, I met up with friends to go to the theater, visit museums and for meals. I attended five plays and browsed a few museums, all but the Met for the first time, and tasted New York’s cuisine. 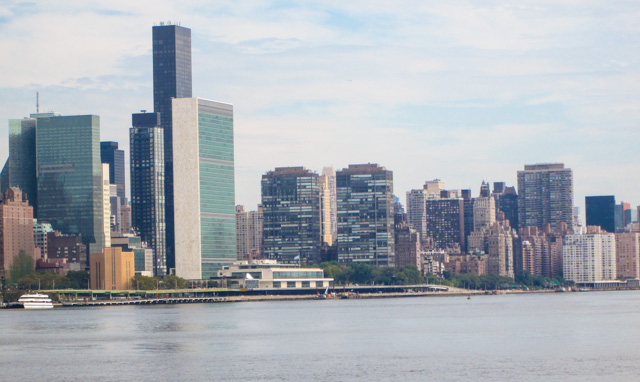 “ Olso “ was a gripping play, brilliantly acted and staged at the Newhouse in Lincoln Center. A Norwegian couple facilitated secret negotiations between bitterly antagonistic Israelis and Palestinians. After prolonged and difficult discussions, a peace accord was signed. As hopeful as that agreement was at the time, it was not successfully implemented and the dispute remains unresolved. One of the main characters in the real drama, Shimon Peres, then Israel’s foreign minister, just died. I was reminded of my policy work at the World Bank where a team would spend a year analyzing policy, and another year persuading the government to adopt its recommendations, but in the end, if luck prevailed, only some of the program would be successfully implemented.

I don’t usually enjoy plays about Georgian manners, but the production of “Sense and Sensibility” at the cozy Gym at Judson was absolutely delightful. It is a comedic and dynamic adaptation that retains the essentials of Austen’s novel, but with a modern sheen. “Quietly” was a story of reconciliation after the Irish “troubles”, intense at times, but the accents were not easy to follow. “Small Mouth Sounds” at the Signature Center was about a silent meditation retreat that had moments of humor and insight, which I recognized having attended one, but I can’t say that the production was riveting. “The Good Earth” at the Flea, a play devised in Wales about a village struggling against developers, was acted and staged interestingly, had songs in Welsh, but the story was not exactly new or gripping.

The new Whitney Museum downtown has remarkable modern architecture with galleries and terraces on several levels, some with views of the Hudson River and New Jersey. Two floors had “Human Interest” portraits from the Whitney Collection, a few by Andy Warhol and Richard Avedon. Another level displayed works by Stuart Davis, who painted colorful advertisements, but later moved to equally colorful abstracts under the influence of French artists. 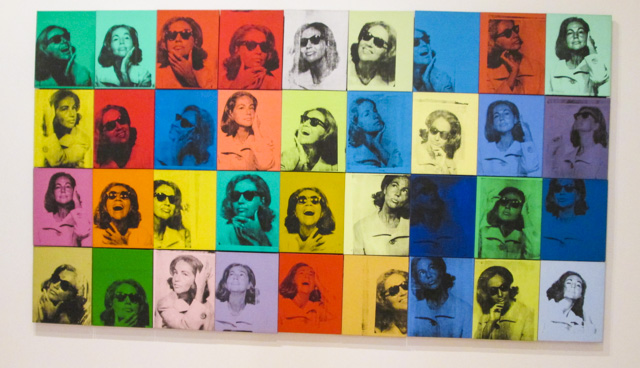 The New Museum in the Bowery, dedicated to modern art, also had striking architecture–six huge shiny boxes of varying sizes sitting unaligned on top of one another. A number of levels had terraces, but the city-scape views were not attractive.   Thee colorful design paintings by Klint provoked thought, reminiscent of india’s Raza’s work. The International Center of Photography across the street had an exhibit of mixed media (photos, video, film) titled “Public, Private, Secret” showing how identity is shaped by disseminated images.

I visited the Met on several occasions. The South Asia galleries had exhibits of Indian miniatures that included exquisite paintings of a lady with a sharod and of Krishna with Radha. Another exhibit of Nepal and Tibet had a unique brass Buddha and a luminous Thanka painting of a monk. The first, huge gallery of the Asia Wing has an enormous Chinese mural on one wall and an array of striking Buddha statues and, not much further in, is the Japanese gallery with equally composed Buddhas.  I went to Met Breuer to see a well-arranged exhibit of Diana Arbus’s early photographs taken when she was developing her unusual style for capturing eccentric people. 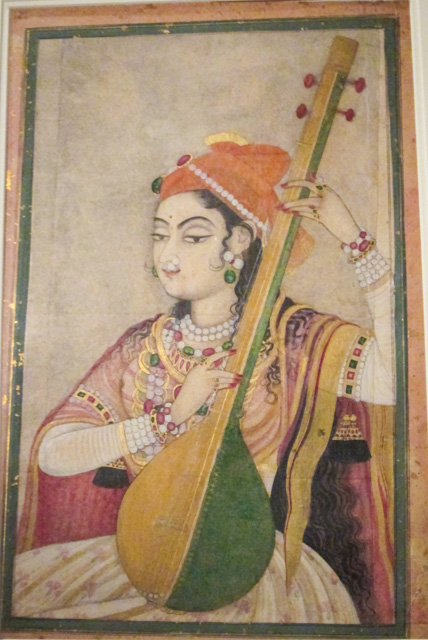 On my first evening, I chatted with a couple at the theater about restaurants in New York. In their opinion, because the city has so many, it is not easy to know which are good. Despite consulting Tripadvisor and Yelp, they proved to be right.

Most of my meals were on the fly at semi-fast food places or take-outs, but I did eat at a few restaurants. At Shake Shack in Madison Square, the “Shroom Burger” of crisp fried Portobello mushroom with Muenster cheese and crunchy fries, chased with a beer or lemonade, made for a good al fresco meal. Surprisingly, the salads at Pret a Manger were not half bad. The Saag Paneer, Dal, rice and Naan from Indikitch (Indian Kitchen), a make-your-own combination meal place, without a single Indian behind the counter, was authentic, but their Mulligatawny soup was not. I couldn’t resist a visit to an old haunt, Sarvana Bhavan, a South Indian vegetarian restaurant in Little India, but sadly its standard has fallen dramatically. That sentiment also applied to Pete’s Tavern in Gramercy Park, I place I frequented when I lived in New York. 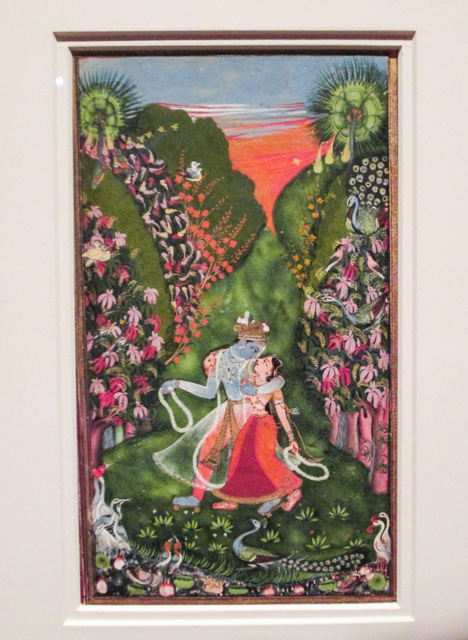 Indian Accent, a fancy transplant from New Delhi, had impeccable service, but its creative food dishes had a too-spicy edge and the portions were tiny for lofty prices. Sabbia in Eataly, an Italian Market with several restaurants, has Mario Batali, a famous chef, as a founder, but my fusilli with squid, shrimp, clams in a tomato and white wine sauce was unremarkable–I had to hunt for the seafood in the scatter of pasta pieces.

My best restaurant meal was at Salinas, a Spanish restaurant. The Bacalao (salt cured cod) with bell peppers, eggplant, zucchini, tomatoes and olives was outstanding, but my main dish of lobster with overdone ink pasta was just so-so, and the desert of coconut flakes, nuts, berries with chocolate ice cream was a good finish. The Abadia Da Cova Albarino and Negre Garnacha were excellent wines.

I started my day with a walk on a path along the edge of the East River with a noisy highway on the other side. Although early, it was already hot and humid. The walkers, joggers and bikers managed to avoid collisions even after the path narrowed. Living in a crowded city teaches consideration, if only for safety’s sake. On the way back, I usually made a detour to pick up a well-toasted onion bagel with butter from Tal Bagels, run by a small army of Bangladeshis, my favorite meal in New York.

I walked as much as possible and, if the distance was too long, I took buses to get a feel for the city and its people. Many of my strolls were on routes to the west and south from my apartment on 1st Avenue and 23rd Street. I passed Union Square, parts of it had tables and chairs for people to sit, eat and drink, especially handy on days the Farmers Market stalls occupy one end of the square. Compared with the Marin Farmers Market, it had fewer stalls, and a smaller variety of produce, meat and cheese. I may be biased, but the offerings did not look as robust or attractive as in California. Our favorable climate helps the state to produce one-third of America’s vegetables and two-thirds of its fruits and nuts. And I know how the last words in that sentence sound. 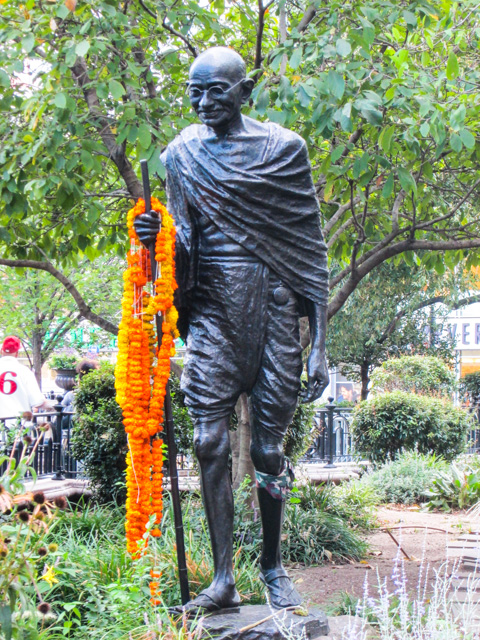 Further down, University Place had an art fair with stalls on both sides for a few blocks. Some abstract pieces of New York’s city-scapes were noteworthy. Still further down, Washington Square Park, much better landscaped than when I lived nearby, had busy chess tables and skate boarders whizzing around, but much more civic than in my memory, with people sitting on benches, chatting or reading. 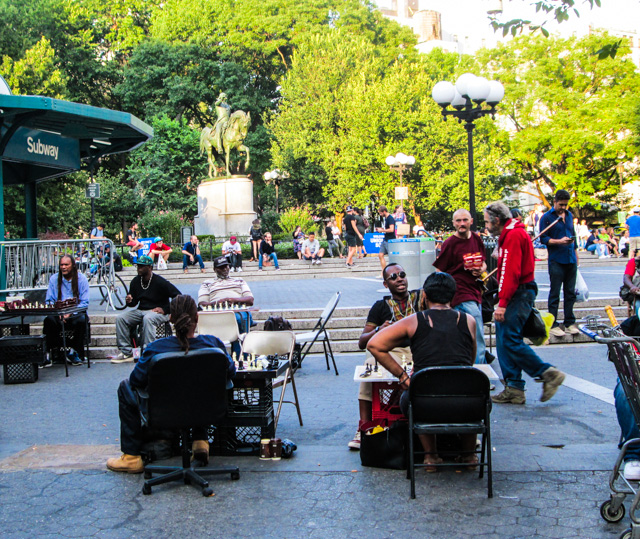 As usual, I could not decide to move, or not to move, back to New York, postponing it to a longer sojourn next year.