I was introduced to Gaston Acurio’s cuisine on a visit to Lima a few years ago. He was already famous, with restaurants in Lima, Argentina, Mexico, Chile, Brazil and Spain, and through his cookbooks and a TV show.  Now he has about 30 restaurants in at least a dozen countries, including in each of the major US cities—New York, Los Angeles, Chicago, Miami and San Francisco. He has amplified Peru’s indigenous cuisine with ingredients and cooking styles from its colonizers and immigrants– Spain, Japan, China and Africa–an accomplishment that has deservedly placed him among the world’s highest profile chefs. Danny Kou, his executive chef in San Francisco, earlier worked in the same capacity at El Rocoto, a Peruvian restaurant in the Los Angeles area. He is a graduate of Le Cordon Bleu College of Arts in Pasadena.

Our table was on the spacious deck overlooking the Bay—a site with a potentially spectacular view, but the evening was cool and grey. Overhead heating high up in the ceiling kept us warm, much more congenially than heat lamps placed near tables. The restaurant has a separate bar to the right of the entrance, an eating counter just before the lofty indoor dining space. Floor-to-ceiling windows grace the way to the patio.

While we perused the extensive menu with exotic offerings, the wait staff brought a cone of fried plantains and potatoes with two sauces—reddish and mustard colored—to whet our palate. After much deliberation, we ordered two Cebiches, one Causas, one Anticuchos and one main course to share among three of us.

Causas are whipped potatoes or other vegetables topped with seafood. Our Causa Pulpo had grilled Octopus on a basil spinach causa with avocado puree and olive aioli topped with crispy basil. It was beautifully presented. The Octopus was unusually tender and the causa added an intricate blend of green vegetables to the taste. 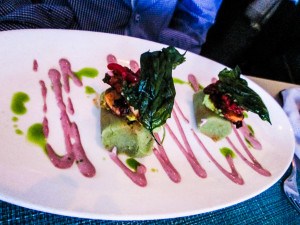 Anticuchos are grilled skewers and our order of Corazon was of beef heart with fried potatoes and a rocoto huanciana (pepper-cheese) sauce. I did not taste this dish, but my dining companion felt the meat was rubbery, although the sauce added a tangy taste.

My salmon fusion had shrimp, broccoli, mushrooms and snow peas in a spicy aji panca (dark red, mild pepper with a smoky, fruity taste) sauce made with coconut milk. It tasted much like a Thai fusion sauce in a recipe from Terra Restaurant in St. Helena, but a tad sweeter, accompanied with a side of chaufa (white rice, adapted from Chinese). The salmon was perfectly done, moist and delicious with the sauce. The rice was just right to mop up the rich sauce. 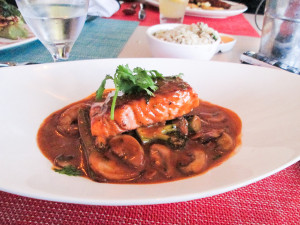 Feeling sated, we just ordered two desserts to share. The first was a Mazamorrita tart made from purple corn and pineapple with crust of whole oats, quinoa and almond. It looked and tasted like a blackberry pie, but the crust was a trifle heavy, lightened by a meringue ice cream topping. The passion fruit mousse layered with raspberry compote, chocolate mousse and almond praline was a delicious mélange of fruit and chocolate, light as a feather. 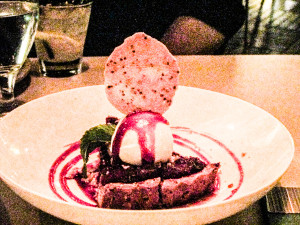 Two of us chose a 2013 7 Fincas Torrontes from Mendoza that had floral notes and paired well with the cebiches, but was too light for the salmon and octopus. The third among us had a couple of Tequila Daisies with less syrup than usual to allow the tequila taste and lemon to come through.

There was a delay in seating us due to a bit of confusion among the welcoming staff, but once seated, the waitress was courteous, knowledgeable and attentive and the bussing staff was efficient.

La Mar Cebicheria Peruana is at Pier 1.5 along the Embarcadero in San Francisco, CA 94111. Telephone: 415-397-8880. Its website is (www.lamarcebicheria.com/san–francisco. Reservations are recommended. Parking is available in nearby lots and on metered parking a little further away.