I was sitting at the bar of Lumberyard Brewing Company in Flagstaff, Arizona, eating a bowl of chili to warm my insides, drinking their excellent draft American IPA (India Pale Ale) and gazing distractedly at a football game between Notre Dame and Stanford, when the man sitting next to me tapped me on the shoulder and asked, “You an engineer”? As stereotypes go, not a bad one. “No, I was an economist”, I answered. 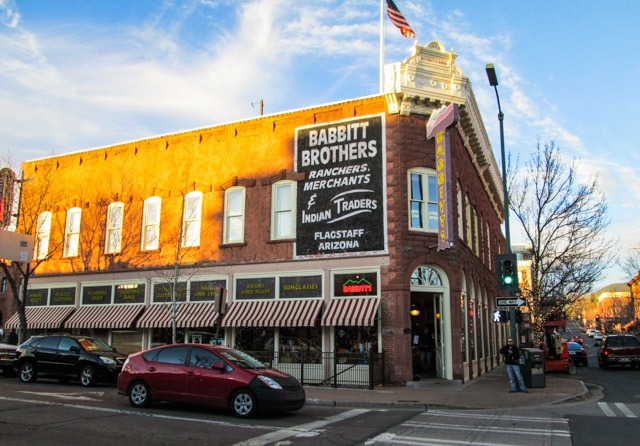 “I got a Masters at the university here (Northern Arizona University), but it didn’t do me no good. I drove a truck all my life.” He was in my age group, about 70. “I was in the service, served in Vietnam. I hate it that we are no longer the world power. Russia and China are stronger than us”. I reassured him that was not the case, but he wasn’t listening. “That Obama is a pussy. He should send in troops to take care of ISIS”. I sensed where the conversation was heading and answered neutrally, “Its a complicated situation. The last time US troops went in, they were there a long time, but the region is still a mess. Anyway, I’ve got some skin in the game”, pointing to the TV. 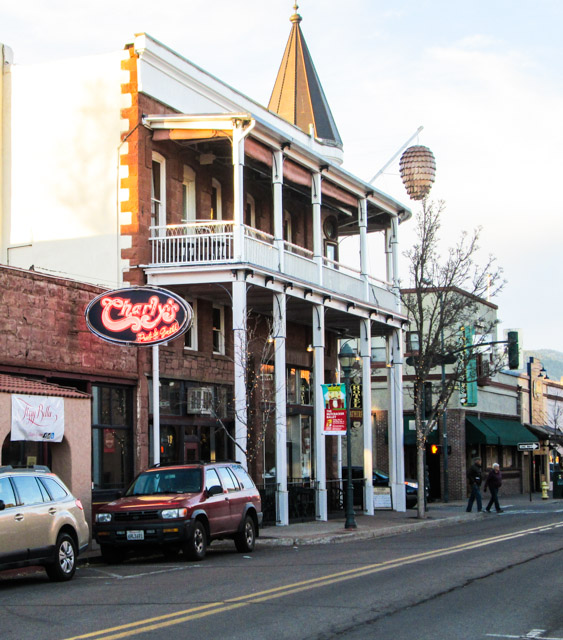 “Where do you live”, he asked. “Just north of San Francisco”.   “I used to live in California, but I didn’t like the gun laws. You have to keep the magazine in one place and the gun in another. What good is that in an emergency.” San Bernardino had not happened.  “Do you own a gun?” “No”, I said, “I don’t. Why do you need one?“   “I’ll will be able to protect myself if they invade.” “Who is going to invade the US?”, I asked. “Well, just in case, they should know that every American has a gun to defend the country and protect himself.”

After a pause, he asked if I was married, had a family. I told him I was divorced and my daughter was at law school.   He was on a second marriage, had a 20-year-old son from the first and a six-year-old daughter from the second.   “My son worked for the Indian restaurant down the road. The owner is a slave-driver, so he quit”. That comment reminded him of immigrants, who, in his opinion, were taking jobs away from Americans.   “You should think of marrying again, have someone to look after you. I did that, went down to Latin America and got myself a young wife. Americans are treated special down there, easier to find a wife”. My wife and daughter are out shopping.” He left soon after he got a call.

Stanford won the game with a field goal in a thrilling finish. 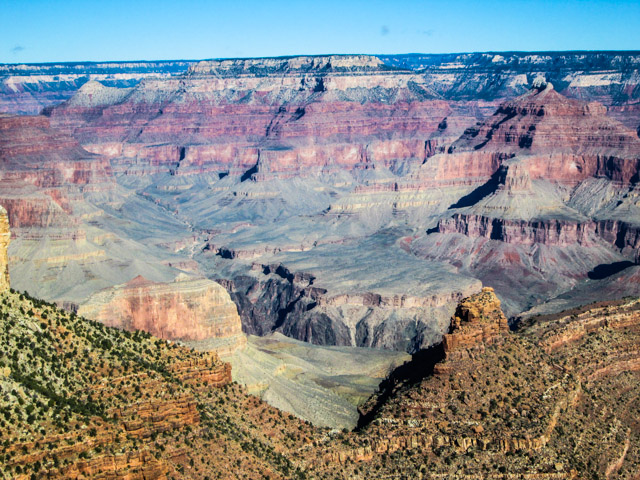 Flagstaff sits at an edge of the Colorado Plateau at an altitude of 7,000 ft, surrounded by the largest pine forest in the US and near mountains called the San Francisco Peaks. Its economy was based on lumber, but it has since diversified into tourism–as a staging area for the Grand Canyon and relief from the summer heat of Phoenix–Northern Arizona University (NAU) with 20,000 students, a couple of science observatories and large businesses.

Its historic downtown is attractive. I walked around it for a few hours on two late afternoons and evenings, passed a studio where women were practicing Native American dance and noticed an unusual number of Asian restaurants, more numerous than bars and saloons, probably catering to students. Some historic structures date back to the late 1800s/early 1900s such as the Babbitt Brothers Building, McMillan Bar, and Charly’s Bar in the Weatherford Hotel. I walked though NAU’s spacious campus to visit the huge Riordan Mansion built by two lumber baron brothers with a stone and pine log exterior and arts and crafts furniture inside, some made by Gustav Stickley, considered the father of the American Arts and Crafts movement. The imposing stone building of the Museum of Northern Arizona in the outskirts of Flagstaff provided information about the area’s geology, archeology and ethnology together with exhibits of Native American textiles and craft products. 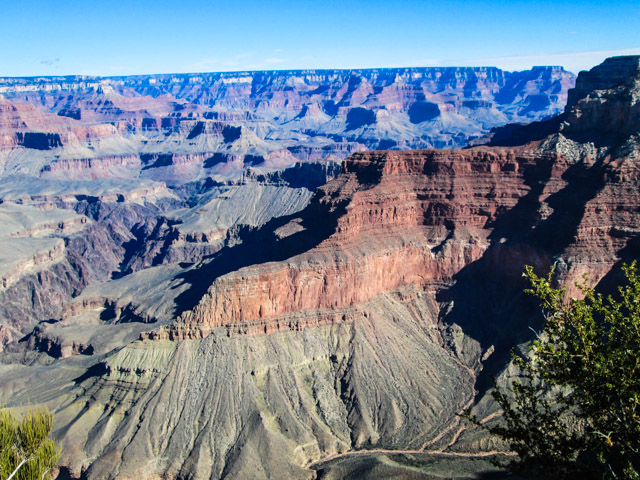 I gave up on American beer around 1970, soon after arriving in the US. After drinking European brews for nearly a decade, Schlitz, Budweiser and Coors looked and tasted like you know what. If I remember correctly, US laws restricted the alcohol content in beer. A few years ago, I discovered that those laws had changed and craft breweries had sprung up that made excellent beer. I am partial to India Pale Ale. It got its name because that style of beer was exported from Britain to India by ship, improving in quality from the long voyage. Depending on the brewer, I relish the bitter taste of hops, the touch of smokiness in the cloudy brown brew and the 6 plus percent alcohol for the jolt. But I am far from a connoisseur of beer, just enjoy drinking it.

At McMillan’s, a saloon from 1887, while tasting its Deschutes Fresh Squeezed IPA, I chatted with a young filmmaker from Los Angeles taking a break from a demanding schedule to reconnect with Flagstaff and NAU where he learned his profession. At Charly’s in the Weatherford Hotel built in 1900, I enjoyed a popular middle-aged band playing Blues music to a similarly aged audience. Although Charly’s IPA was good, I could have done without the highly touted Navajo Vegetarian Taco, deep-fried, thick round corn bread layered with a huge dollop of black beans and a sprinkling of salad. A young man noticed Bangkok on my cap and told me had been there many times for connecting flights to Nepal to hike in its mountains. He wished he could join a friend who is there to help with reconstruction after the devastating earthquake.

The drive from Flagstaff to the Grand Canyon was under an hour and a half each way. The route climbed to over 8,000 feet, moving through pine forests, and down to 6,000 feet where the mountains receded and road cut across a plateau covered with desert shrubs. On the way back, the snow-covered San Francisco Peaks were an impressive view approaching Flagstaff. 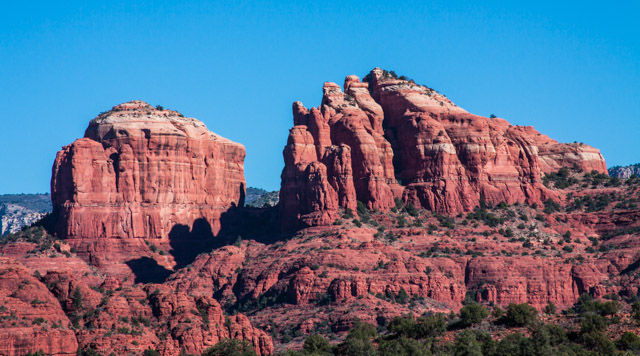 My previous visit was about a decade ago during the summer. I was tempted to hike down a trail, but the heat deterred me. This time, with the temperature at just below 40 degrees, I assumed it would be possible. At the trailhead, a notice suggested wearing crampons, which I did not have. Apparently, parts of the trail were slick from earlier snowfalls. Foiled again. Instead, I took the shuttle or hiked from stop to stop along the Rim Trail to the West and got views of the Canyon from vista points along the 8-mile route. It’s difficult to resist taking photographs of the wondrous geologic formations with layers of colors a mile deep, but it’s better to just sit on a bench for a while and take in the scenery.

From Flagstaff, I drove through Oak Creek Canyon to Sedona. A swath of the canyon is visible from the vista point at the top. As I got there early, Native Americans were setting up stalls to sell jewelry, rugs and other craft objects. The road wound down the wooded canyon to the creek with picnic areas and campgrounds on its banks. The landscape opened up approaching Sedona with spectacularly shaped red rock formations, Cathedral Rock the most famous among them. I drove to near its base and parked off a road appropriately named Back O’ Beyond. I hiked closer to take photographs. A hill rose on the other side of the parking area, studded with large houses with floor to ceiling glass windows facing the rock, providing amazing shades of color at dawn and dusk. 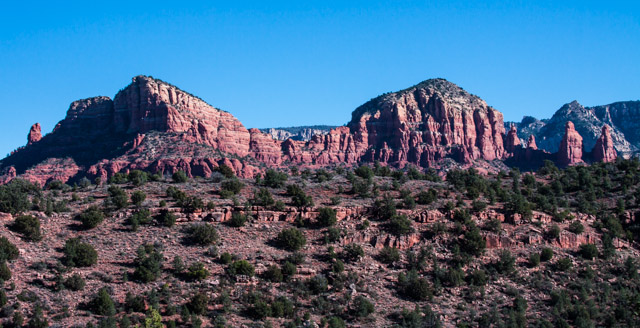 I also stopped at Red Rock State Park and hiked a few miles to a higher elevation to get views of the Cathedral and other rock formations. The Sedona area was used as a scenic backdrop for Hollywood Westerns. In my mind I could see John Wayne or Gary Cooper riding across the desert intently leading a posse chasing bad guys, not paying any attention to his surroundings. Some of these movies were based on Zane Grey’s novels, which I read avidly when I was young. They sparked a sense of adventure and self-reliance that I have retained. Because his novels helped make Arizona and the West famous, he is remembered on plaques and names of bars and a cabin he owned on the Mogollon Rim has been reconstituted as a museum in Payson, Arizona.

Among the watering holes I visited in Flagstaff was Blendz, a wine bar that allowed clients to blend their own wines and also served Arizona wine. Intrigued, I tasted an Arizona Grenache, crisp, light bodied with an after-taste of ripe pears. Impressively, the wines were served in Riedel crystal stemware, the gold standard for the cognoscenti. The bartender told me of a wine growing area on my route to Prescott, where I was heading. I stopped at two wineries: at Page Springs Cellars I liked the Malvasia Bianca, New Mexico, 2014, also light and fruity; and at Javelina Winery, the Tempranillo, 2013, an earthy, full-bodied wine with hints of tobacco, a silver medalist at the San Francisco Chronicle’s Wine Competition in 2015. Except for the Tempranillo, the prices of the wines were out of line with their quality, but could sell in Arizona to loyal locals and curious tourists. 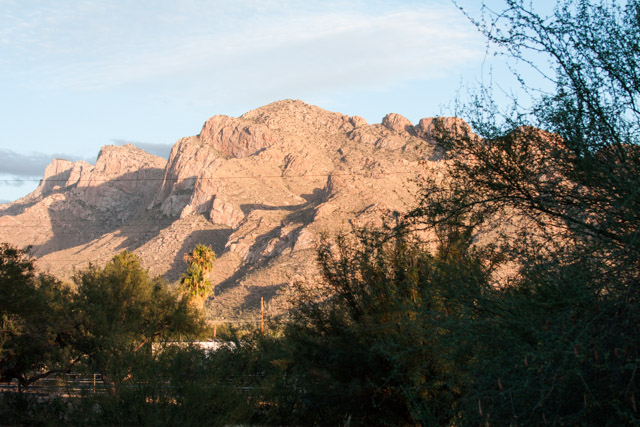 I took the scenic route up the mountains through Jerome down to Prescott Valley. Jerome, perched on the side of Cleopatra Hill with views of Sedona and the San Francisco Peaks, reminded me of Assisi in Italy. It was a prosperous mining town until they closed in the 1950s and the population dispersed. In its heyday, at the turn of the 20th Century, it was littered with saloons and gambling joints. Hippies revived the withering town in the 1960s as an arts colony and it is now a tourist attraction.

Prescott was the first capital of Arizona and still boasts many historic buildings downtown around the courthouse where Senator Goldwater announced his run for the presidency. Many famous Western characters lived in or passed through the town such as Virgil Earp, Wyatt’s elder brother, possibly Doc Holliday on his way to Tombstone, and Billy the Kid. 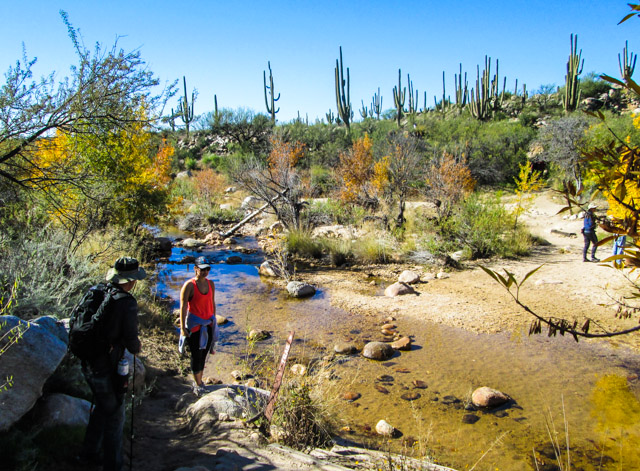 The town is now home to Yavapai and Prescott Colleges and several other institutions of higher education. It climate attracts retirees and people from Phoenix who wish to avoid the summer heat. I arrived in the evening with enough time to sup on a hearty mushroom and tomato bisque soup chased with a Ponderosa IPA at the Prescott Brewing Company. The next morning, I walked the square around the courthouse where many buildings had plaques giving their colorful history. Close by is Whiskey Row with several saloons, a notorious red-light district until the 1950s. 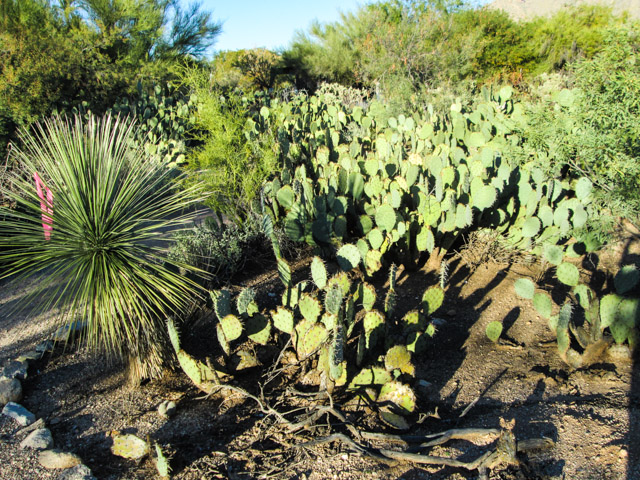 I spent a warm and wonderful Thanksgiving with friends in Tucson lodged in the luxurious casita adjoining their hacienda. I also reconnected with friends from 40 years ago, still busy writing academic papers and presenting them at international conferences. To help digest the sumptuous meals, we hiked up the craggy hill visible from the hacienda and a longer one in Catalina State Park. I saw desert vegetation of shrubs and unusually shaped cacti for the first time. It had an unexpected allure for me, although getting too close led to fine needles stuck in my hands and clothes. I visited Tohono Chul Park, where desert plants are assembled and labeled in a large area with a path to walk through. A small meditation alcove provided a welcome chance to be present and be thankful for all I have.

One Response to Glimpses of Arizona, 2015