I never need a special reason to visit New York—the city offers countless attractions for me. But this visit was to attend the auction at Sotheby’s of a painting I own and to participate in Asia Week, a celebration of Asian Art. I did the circuit of auction houses, galleries and museums, attended lectures and receptions, but left space to see a couple of plays, meet friends and try restaurants. 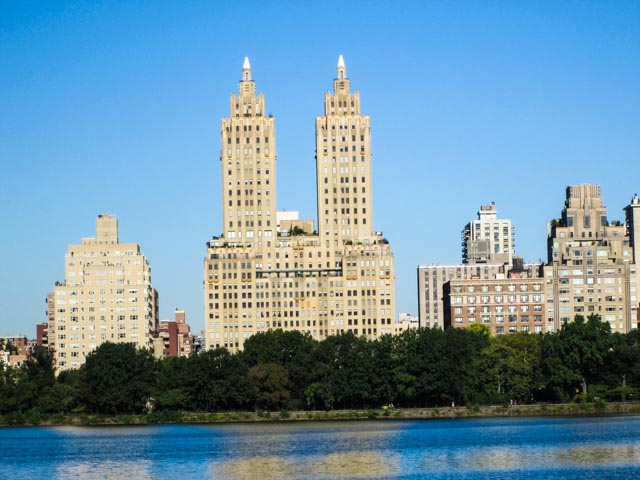 The sheer amount of art on display, ancient and modern, mostly from China and India, but also from the rest of Asia, was stunning, especially in the auction houses. In this forest it was difficult for any one object to stand out, but the Buddha statues in marble from Myanmar were exquisite. The texture and smoothness of the stone shrouded Buddha in the deep meditative serenity I imagine he attained.

In the receptions, lectures and auctions I found myself among curators, dealers, auctioneers, art academics and collectors, professionals I do not usually meet. The old guard was decrying the rise of commercialism and decline of genuine interest in art. Academic lecturers read out their papers in a soporific monotone, but the photos of art they displayed on screens kept me awake. I learned that collectors are a profession, of which I am apparently a member, considered custodians of art for the future, a heavy responsibility.

I met a person who made money at Apple and Microsoft and now sits on the Board of a museum in Seattle advising on South Asian art, his post-wealth career. I had similar short conversations with collectors whose knowledge and resources way outstripped mine. But I learned most from Natvar Bhavsar, an accomplished artist of Indian origin who lives in Soho. I went to his studio to see his large canvases that were painstakingly layered with fine pigment powder, varying hues of one color, a technique based on Indian sand painting.  He has gained recognition in the US, won several awards, but craves the same attention from India.

Each participating auction house held several auctions every day divided by kind of art and period of the work. I attended one a day before my painting was to be auctioned to get a feel for the process. It was held in a large room with the auctioneer in front and banks of people taking bids on the telephone and online on two sides of the podium in competition with bidders with paddles in the room. Most items, including very expensive ones, were transacted quickly, either sold or passed, in a matter of seconds. Occasionally, there was a series of counter bids that went well beyond the price range in the catalog. The next day, sadly, bids on my painting did not achieve the reserve price.

In breaks from Asia Week, I met friends with whom I went to plays, visited museums for the first time and had meals. The “Lives of Saints”, a series of skits, was billed as piquant and pleasurable, sometimes daffy.   Not for me though, barely laughed. In contrast, “Rasheeda Speaking” was a well constructed and acted play about race relations at work. An African-American secretary, herself likely bigoted against Latinos, is the butt of criticism and suspicion because she does not fit in when she behaves stereotypically, but is accepted as she morphs into “white” behavior.

I had not visited the Rubin Museum or the Frick Collection, The Rubin is cozy gallery displaying a substantial collection of Himalayan art—painting, sculpture, textiles and photographs–on six floors with a connecting spiral staircase. An exhibition of a French photojournalist wandering around the mountains, including Darjeeling, was the highlight of my visit. The Frick exhibits a large collection of masterpieces of Western art in a stately mansion that include landscapes by Constable and portraits by Rembrandt displayed in galleries adorned with 18th Century French furniture, Italian bronzes and Chinese porcelain.

Walks in Central Park are an integral part of my visits to New York even in a seriously chilly wind. I watched the St. Patrick’s Day parade of militias and bands marching by that got monotonous after a while, and walked to the Conservatory at the north end of the park to see the Untermeyer fountain, an obsession of Wally in my writing class and the subject of his research. 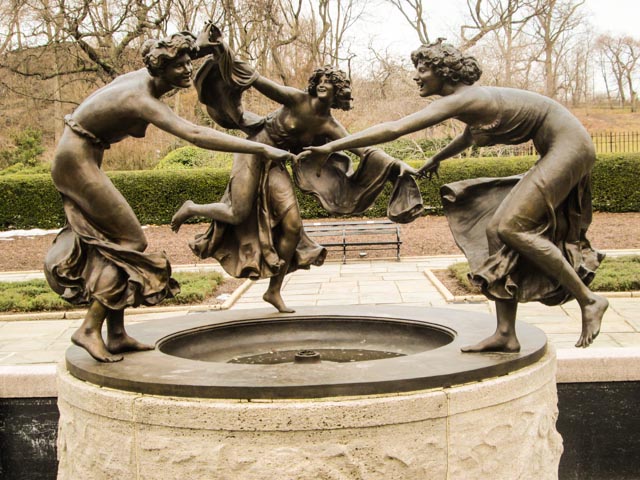 My go-to place for meals was a chain named “Hale and Hearty” that offers hearty soups, as the name suggests, to ward off the cold, and good sandwiches. On one occasion, I had a delicious curried cream of cauliflower and apple, a Daniel Bulud recipe. I also had good meals with friends. Red Farm is a popular pan-Asian restaurant on the West Side. The starters we ordered, Katz’s Pastrami Egg Roll and Shrimp with Snow Pea Leaf Dumplings were innovative and tasty, especially the deep-fried pastrami and the flavor of pea leaf on shrimp. The mains, Wok Sauteed Sea Bass with Black Bean and Basil and Mixed Vegetable Fried Rice, however, were OK, but not memorable. We had an almost dry rose from Greece, a far cry from the Retsina of my youth, which paired well with the mildly spiced food.

Recette, located deep in West Village, sports an “Urban American” menu of small plates designed by young chefs with great pedigrees. Perhaps we did not select well, but our order did not live up to the hype, although it was just fine. The lightly sautéed mixed veggies with nuts served in a small iron bowl had their natural flavors enhanced and a plate of olives, some fruity and others acidic built an appetite that was further developed by a wild arugula salad with navel orange, mint hazelnuts and ricotta. But my main dish, a shrimp dumpling soup, was disappointingly bland. Ah well. Towards the end of the meal, I wondered out loud if I could teach again at NYU after an absence of 35 years. It turned out, yes, it was possible. An intriguing prospect that brought with it the chance to live in New York for three months.

In contrast to New York, I always need a reason to visit Washington DC. I lived there for 15 years, but never took to it. The city’s dominant population is US bureaucrats, many walking around with eyes glazed, made comatose by the drudgery of mindless work for years on end, numbing the senses for good art, music or food, accommodating low standards in everything.

The reason for this visit was to explore teaching economic development at NYU because a good chunk of the research is done in Washington, and conversations with my former colleagues and others who are up to date with the literature, would help me assess if it was feasible for me to become current. That mission was accomplished and visit turned out to be an unexpected and welcome pleasure mainly because I reconnected with friends and colleagues and enjoyed greatly their intelligent conversation and insight into world developments. Also, and unexpectedly, Washington showed signs of vibrant life and the restaurant offerings have improved in variety and quality.

The few weeks of Spring and Fall offer the best weather in the city. On this visit, it was all over the map, hot and humid and in the 80s one day, cloudy and cold the next. I walked to the Tidal Basin hoping to see the Cherry Blossoms in bloom, but I was late by a few days. Still, large, colorful flowers remained on some trees there and in other parts of the city. A run along the towpath from Georgetown to Fletcher’s Boathouse reminded me of the contrast between verdant the vegetation of the East Coast and the already-turning-brown hills of California. 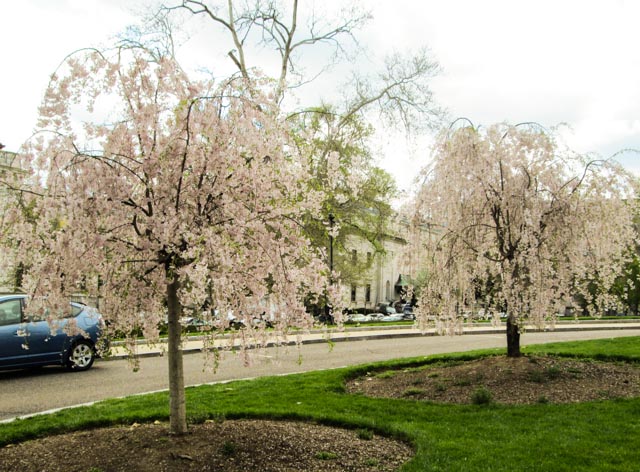 I spent a good part of a day wandering around art galleries. The Phillips Collection, in a much-improved building and presentation, had some paintings by virtually all the great European and American masters, including a room with large Rothkos with simple titles like Green and Tangerine on Red, each evoking a different visual and emotional response. Renoir’s Luncheon of the Boating Party caught my eye for its festive ambiance and lush colors.

The East Wing of the National Gallery of Art was closed, except for the Atrium that had a huge untitled colorful Calder hanging mobile, its size dominating the other exhibits. The West Wing had an eclectic collection, but the special exhibit of the Three Wise Men by Rubens, Jackson Pollock’s Lavender Mist, and several by Rembrandt were especially noteworthy. I walked through my favorite museum, the sculpture garden of the Hirschhorn with its many Henry Moores and few Rodins, notably King and Queen by the former and Burghers of Calais by the latter. 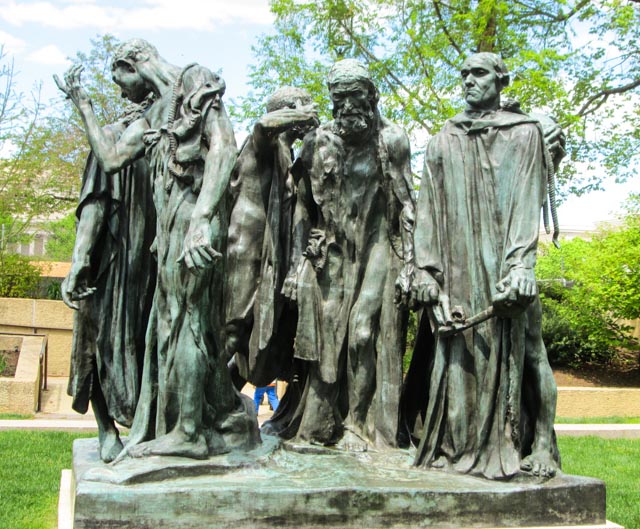 Further down the Mall, I walked into the WW II Memorial for the first time. The 56 huge granite pillars, one for each State and Territory, arranged in a semicircle around a plaza with a fountain in the middle and two triumphal arches on opposite sides, a fittingly grand memorial for the 16 million soldiers that served and 400,000 that died.

Most of my meals were with friends, in and around the World Bank for lunch, at restaurants or in their homes for dinner. My go-to chain restaurant on my own was Shop House, a Southeast Asian Kitchen. It has a small menu, but complicated to assemble a dish because of the many add-on options. For example, my choice was organic tofu with ginger, tamarind and cilantro on top of Jasmine rice, with corn with garlic and sesame added and garnished with green papaya slaw and splashed with red curry sauce.   It was head-sweatingly spicy, closer to Thai food than any other South East Asian country, but great value for under $10.

My best restaurant meal was at Estadio, which serves Spanish tapas on 14th Street N.W., now the liveliest area of the city. Three of us started with a boat of marinated olives, wild mushroom croquetas with roasted red peppers, Brussels sprouts with caramelized onions and pine nuts and a baby arugula salad with peppers and hard boiled eggs. That left room for just two mains—scallops with roasted cauliflower and spice grilled chicken with cabbage slaw, rice and salsa. For me, the scallops stood out, perfectly succulent, edged with a crunch of smoky cauliflower. To accompany the food, we had an Albarino from Rias Baixes, a grape derived from reisling, but a fuller, drier wine and a Garnacha from Navarra, abundantly fruity, one of my favorite grapes. 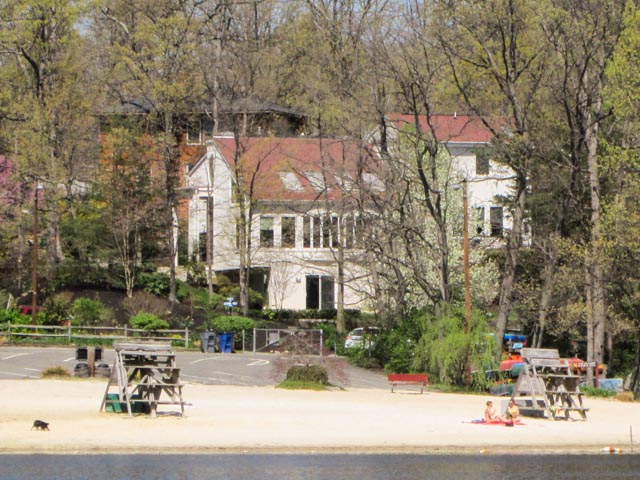 Meals at family and friends homes ranged from Iranian kebabs, to Thai, Vietnamese, French and Indian Punjabi and Bengali. I took a slow boat-ride on Lake Barcroft situated in a forest in Falls Church, a community surrounded by mansions with a beach or two where people were sunbathing on a sunny afternoon. Much more important was the time spent with them, feeling their warmth and enjoying the free-ranging discussions about everything, a critical aspect of life I lack in California. Signs of vitality in the city—a Sunday farmers’ market near Dupont Circle and young people dancing to swing within the circle, the buzz on 14th street and the air of Spring allowed thoughts of spending more time there to waft through my mind. 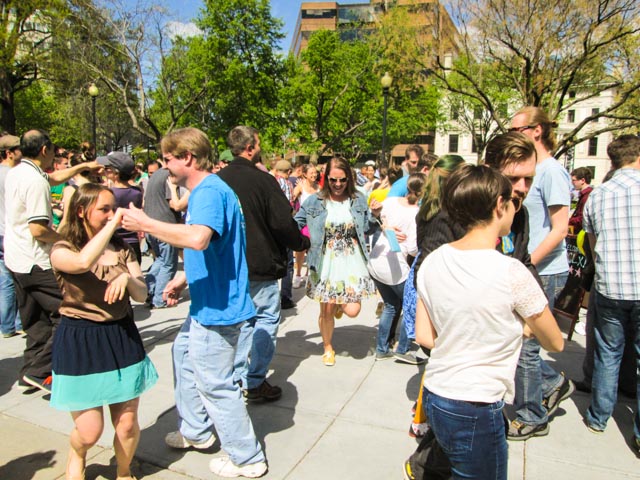 11 Responses to Art in New York and Washington DC 2015